We're still in the experimental stage! Here is a small selection of photos from yesterday, followed by a link to a Picasa Web Album, with more, although these are not captioned. Feedback appreciated. 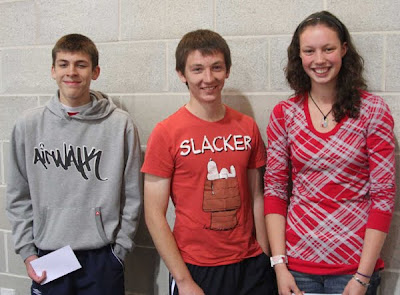 Robert Fawns, Jay McWilliam and Jennifer Marshall were the winners in almost every activity of the weekend. Top team! 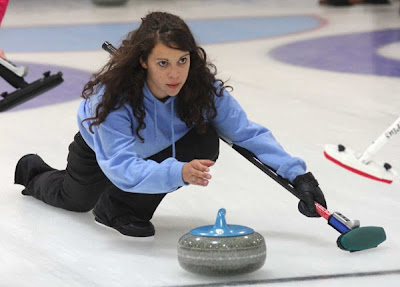 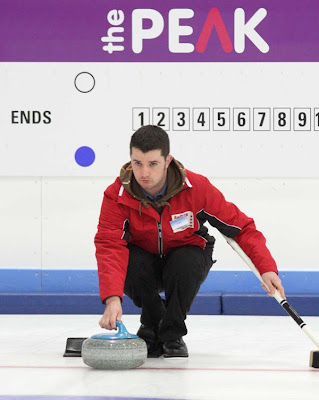 It was good to see Peter Stark on the ice. Peter skipped the GB team which won medals at the 1st World Deaf Ice Hockey and Curling Championships last season. 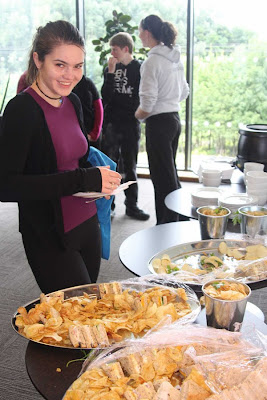 Healthy athlete food at the Peak. 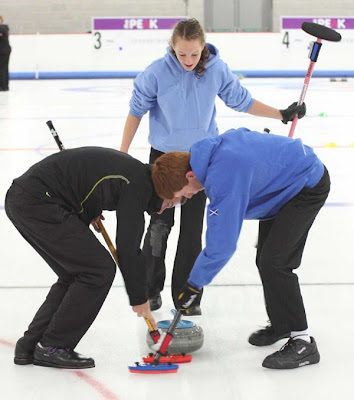 Jennifer Dodds whips her sweepers into action in the draw the button contest. 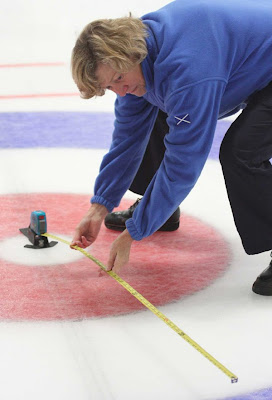 Isn't there something missing in this pic? Irene Hird in action. 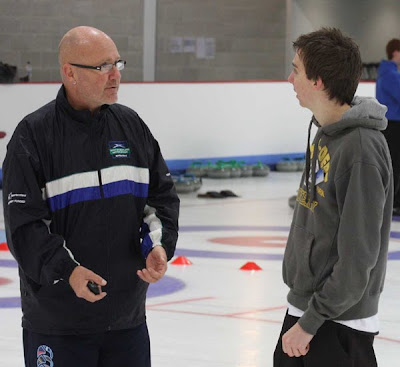 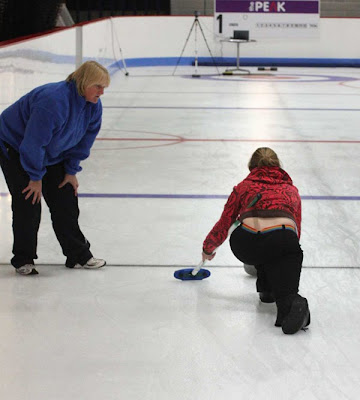 Judith McFarlane's delivery gets special attention from Rhona. Although my mother would have said, "Judith, you're going to catch your death!" 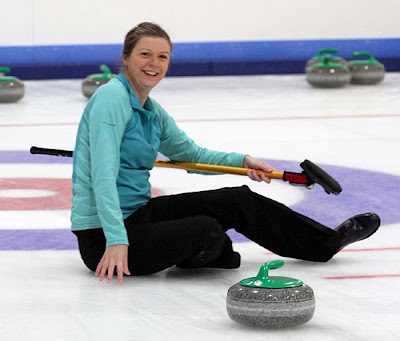 Not a classic delivery, but Fiona Steele did point out it was her first of the season! 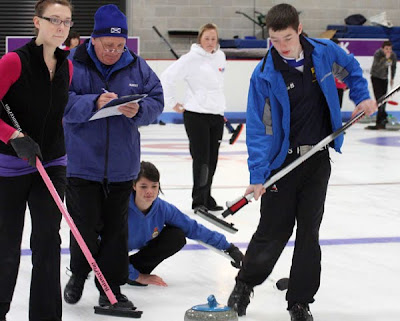 One might ask what Albert Middler is doing in this pic. Good question, but it is the 'zones' exercise, where the sweepers have to decide where the stone is going to end up. 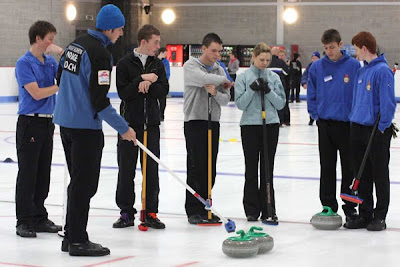 Logan Gray explaining all about angles. 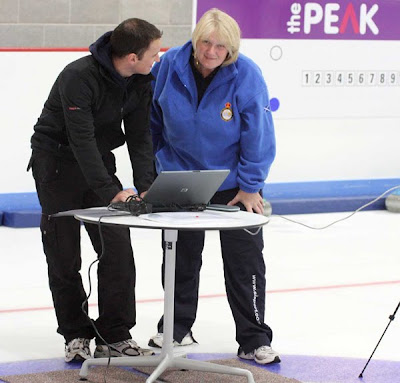 Right, now I'm going to try something different. I have a few more photos (another 36 or so) from the day. If you would like to see them in my Picasaweb Album, here they are. Just click on the block below to go there. Or, go further down the page and see them running in a slideshow. My own preference is to go to the Picasaweb album and run the slideshow from there. That seems to handle the portrait oriented pics better, and the photos are larger on the screen than they appear below in the embedded version.

You can mouseover to navigate the slideshow.

The Regional Academy athletes then are the first rung on the ladder of those receiving support.

The Regional Academy programme supports individual curlers from the age of 14 and up, who already show excellence in curling. Begun by Nancy Murdoch, the programme is managed now by Rhona Martin, the Royal Caledonian Curling Club's Performance Development Coach. The funding of this programme is made possible by members of the Regional Academy paying an induction fee as well as the RCCC administering funds.

An innovation last year was the introduction of a training weekend where all the curlers get together. This year there was a packed schedule with lectures on nutrition, physio, anti-doping and, for the first time, sports psychology, delivered by the Scottish Institute of Sport's Misha Botting. There was basketball, a swimming gala, as well as all the on-ice activities. There were some forty curlers at Stirling yesterday.

Click on my photo above to see the group in a larger size.

Let's be quite clear, I would love to see Scotland have its National Curling Academy. The saga has been ongoing for seven years or more. I believe it was Greenaces and Braehead in the frame at first. Then Stirling. It was in October last year that Kinross won the bid over Ratho to be the site for a new six sheet rink which will also provide facilities for Scotland's elite teams. The new complex is also to be the new home for the Royal Caledonian Curling Club, the governing body of the sport in Scotland, and there will also be a small museum of curling history.

I attended an open meeting about the project at the Windlestrae Hotel in Kinross on February 5, see here. At that time the projected cost was £3.2 million. I am appalled to learn that this figure has now reached over £5 million. In just seven months! The questions have to be asked. Why was the original estimate so much in error, or why has the cost increased in so short a time?

What has prompted this post is that former RCCC Chairman Bob Tait, who remains one of the trustees of the Kinross Curling Trust, distributed by email on Friday a report of a meeting with local club representatives held on August 17 at the Green Hotel.

One significant thing is that the projected date for the completion of the project is the beginning of the 2011-12 season, and not next year, as was hoped for at February's meeting.

I have summarised Bob Tait's report below.

Outline planning permission was made in mid June and that process is continuing. As indicated above, costs are estimated now to be 'in the order of £5m assuming that most of the VAT proves non recoverable'. Cost savings are to be pursued. Funding is being sought from sportscotland and other grant giving public bodies, whilst the RCCC and the RCCC Trust will be responsible for the cost of the office and museum respectively.

The purpose of the recent meeting was to get local fund-raising efforts underway, it being stressed that this area is important when grant-awarding bodies come to assess funding applications. A 'challenging' target is to raise £250,000 (or 5% of the present estimated cost) from local sources, via Kinross Curling Trust activities, local curling clubs, individuals and local companies. The Kinross Curling Trust itself now has an active team led by Linda Young which is pursuing fund-raising ideas on behalf of the Trust. A date has been fixed for the first of these - a BBQ on September 11 at Loch Leven’s Larder, cost £15. A raffle, dinner and auction and fashion show are being planned.

Local curling clubs have been encouraged to identify their own fundraising ideas within each local community with the aim of raising by June 30, 2010, a minimum of £100 per member.

The Kinross Curling Trust’s first AGM will be held in December 2009 at which a fully constituted Board of Trustees will be elected. The Trust’s Constitution dictates that the Trustees are elected by the Members. From the start of the new season in mid September, there will be a campaign to persuade local curlers to take out membership of the Kinross Curling Trust which amongst other things will entitle them to vote at the AGM.

A promotional video of the proposed facility is being considered for national and international promotion. A curling development plan is being drawn up for the next three years at Kinross, with a strong focus on schools.

A further local club fund-raising meeting has been arranged for Tuesday, October 6, at 7 pm in the Green Hotel.

No punches have been pulled in the tone of the meeting report. "It was pointed out that local Curling Clubs really must look to ‘pull their weight’ in this fund-raising process if they wish curling in the area to continue beyond the next few years. The existing curling facility at the Green Hotel is rapidly reaching the end of its life and is highly unlikely to be refurbished due to the prohibitive £1m+ cost of bringing the building up to standard and replacing the plant and machinery."

What confuses me somewhat is that the rationale for a new curling centre at Kinross was as a National Curling Academy, and not primarily as a replacement for the existing Kinross rink. Naively, I had assumed over the past seven years, that funding was more or less in place for a National Academy to be built, somewhere. But obviously not.

A replacement four-sheeter to keep curling in the Kinross area would not cost £5 million! What is the paragraph above intended to do? Scare the local clubs? Bully them? Send them to Cupar? Encouraging club members to help would surely have been better than telling people to 'pull their weight'? It could have been worded better, surely.

Perhaps it is just me, but I thought it rather defeatist to include the sentence, "The troubled economic climate together with the relatively high age profile of curlers will add to the challenge of galvanising local curlers into action but that was felt to be no excuse for not giving it our best shot." Are the local curlers all about to die off? Does whoever wrote this think that 'older people' are not enthusiastic about their sport, or that these curlers don't have the time or energy to get involved in fundraising activities? The more I read this sentence the more angry I get!

The plans for the complex are available from the Kinross Curling Trust's website. I'm no expert in being able to imagine what architects' drawings are going to turn into when the building is constructed. For me, what is important is how good the ice will be. And that the architects don't make the mistakes they made at Curl-Aberdeen.

Not everyone is impressed though about how the proposed building will look. Check out this blogger's take on Archial's designs!

There's been a thread about the National Curling Academy on the Scottish Curling Forum for a while, see here.

I said back in February that I was excited that the National Curling Academy was finally going to happen. Why am I having doubts tonight?

By all means share your thoughts by commenting below, or in the Scottish Curling Forum. Note that you need to be registered on Blogger to comment below (this is easy to do), although you can make your comments anonymously if you chose to do so.

First step in the journey

'Life is a journey' is a quotation that is much overused. When I finished my stint as Editor of the Scottish Curler magazine in May, I had certainly reached a crossroads, and the difficult thing for me was to decide what I really wanted to do as I continued my retirement. I took a few months to decide.

From 1961 - 1992, curling played a major part in my life. For the past seven years, the sport has again been my major focus. When it comes down to it, being involved in this great sport of ours is something that I really enjoy... for all sorts of reasons. So I made the decision to continue in the sport, if I could, and to do what I enjoy most, that is watching it, writing about it, and taking photographs! Who knows I might even have the time now to take part in the odd game or two!

I came across another (anonymous) quotation recently: 'The first step isn't in the taking of the first step; it is in deciding to take the first step.' What should my first step be? Well, here it is! My 'first step' on my new journey is this blog.

Lots of blogallies have followed my exploits over the summer on Skip Cottage. That blog will continue, although not so frequently during the curling season. Curling news, and comment, will be here on skipcottagecurling.blogspot.com. Bookmark this link now.

I'm going to need help as the season gets busier, but more about that in the future. In the meantime, check back frequently, and do comment. There's even a new email address in my profile in the sidebar if you want to write to me directly. Do bear with me as the look and feel of the blog may change in the days ahead.

"Good curling to you all in this new season, and thanks from Bob."
Posted by Bob Cowan at 02:30