Lees's Painting: The Next Chapter 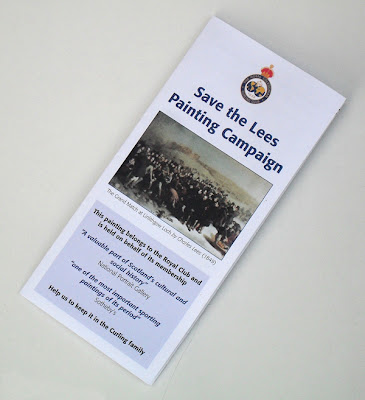 When I arrived home today there was a communication from the Royal Caledonian Curling Club in my letter box. Rarely has an envelope from curling's governing body cheered me up so much. It was a leaflet announcing the launch of the Lees Painting Campaign.

If you follow this blog, you will know at least some of the story surrounding the painting The Grand Match at Linlithgow Loch by Charles Lees. (Here, and here, are good places to start if you don't know the story, and follow the links back in time).

Lees's masterpiece is owned by the Royal Club. Or perhaps it is better said that it is owned by the Club's members! The painting was completed in 1849, and by 1898 it was in the hands of James Law, proprietor of The Scotsman. He was a keen curler and offered the Royal Club the chance to buy it at the very low price which he had paid, namely £116 and 11 shillings, so that it could be preserved for the nation and not 'find a resting-place in a private collection'. At the annual meeting of the Club the motion to authorise the purchase was passed with 'patriotic enthusiasm'.

When I was Editor of the Scottish Curler back in 2006 I discovered that the Royal Club was planning to send this painting, valued at perhaps £500,000, to auction, without consulting us, the members. When this fact was made public, I found that there were many like me who felt this was wrong.

Lots has happened in the intervening years, but I was encouraged by the attitude of Bruce Crawford when he took over as the Royal Club's CEO last year. Bruce was keen that the painting should be kept. After all, the national treasure - and it is such - is a major asset of the Club, and one we all have a stake in! The Chairman Willie Nicoll seemed to agree, a small committee was set up from the Area Standing Committee, and the campaign now to raise funds is one result.

The plan is to have the painting put on public display by November 2011 in time to be the centrepiece of the National Portrait Gallery's 'Scottish Sport Exhibition' which will mark the reopening of the Gallery after major refurbishment.

There is a cost of course, and the challenge is to raise £50,000 for restoration work and to cover insurance and moving the painting from store. All Royal Club members have received, or will receive, a leaflet about the campaign, with a form to accompany donations, which of course can be enhanced by a Gift Aid declaration, if you pay income tax. You can download this leaflet from here.

Another simple way of donating is through an online charity donation site. The Royal Club has one such with Virgin Money Giving (here) which says 'We aim to preserve the heritage of the sport of curling for curlers in Scotland. In the short term we are striving to restore an internationally important picture by Charles Lees called The Grand Match at Linlithgow Loch so that it can be displayed publically in all its glory for the first time in many years.'

There is the opportunity to organise fundraising events and I will certainly publicise these here if and when I learn of any.

All donations will be held by the RCCC Charitable Trust for the sole purpose of restoring and preserving works of art in the Club's care, primarily the Lees painting.

It goes without saying that I am supportive of this effort. I have my cheque book out tonight, and my contribution - as much as I can afford - will be in the post tomorrow.

Fundraising will not be easy. But for me, anything I CAN give, I WILL give, not just because I want to see this great painting on public view again (after all I own, as we all do, a small piece of it), but also in celebration of a victory. THEY (let's not name names) thought they could pull the wool over our eyes, the Club's members. They said the painting had been damaged. They said that the cost of restoration would be prohibitive, and there really was no other course of action than selling it. And they wanted to do this without even an independent assessment being made.

Fortunately there were some who didn't like to be bullied! And thankfully the current Board feels that the Royal Club's works of art are to be treasured and cared for. (Hopefully too its memorabilia, but that's another story).

I hope there are enough out there who can, and will, contribute. Please help if you can, and you are concerned about our sport's heritage. I know how generous curlers can be, from my experiences with the Donate Button on this blog.

You can download an article about the painting and its recent history, and about Charles Lees, from this page.
Posted by Bob Cowan at 19:19