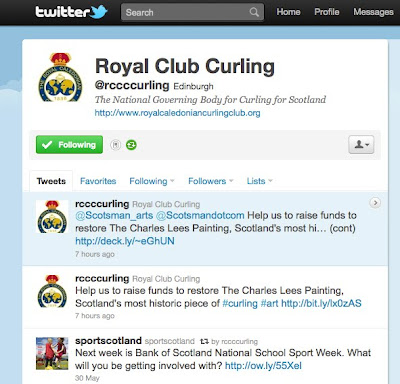 Twitter has been in the news recently. You may have been following the Ryan Giggs injunction story, or South Tyneside Council's efforts to get the company to reveal details of one of its users (see here). Sometimes it is easy to forget that online publishing - in all its forms - is in its infancy. Where will we be going in the future, I wonder?

Anyway, when Twitter first appeared I personally was not much attracted to it. I could not see how it would add anything to my own blogging adventures, and anyway what I usually want to say needs many more words than the Twitter platform allows! There is little I do which involves any immediacy! So I made the decision not to tweet myself, but to stick with this blog.

But when one is in the business of finding things out quickly about our sport (and my other interests) I confess that I do 'follow' a number out there who are regular twitterers.

So, if you are a smart phone user in particular, and want to get an immediate heads up on what is happening on the curling front, you should take note that the sport's governing body in Scotland, the Royal Caledonian Curling Club, now has its own Twitter feed. Go here to see, and follow.

The initiative follows the setting up of a Royal Club Facebook page (see here), and mirrors the activities of the World Curling Federation in these areas. It's all about engaging with curlers in every age group. And getting 'the message' out there to everyone. Yes, I am acutely aware that the curling world is getting younger! And that I'm getting older.

Incidentally, the first Royal Club tweet commented on the fact that Eve Muirhead and Anna Sloan were headed earlier today for the Capital One Celebrity Bonspiel in Toronto, the event in aid of the SickKids Foundation, June 3-4, see here.

So how often will the Royal Club be tweeting, who will be posting, and how useful will it all be? Next season will give us all the answer, I'm sure.
Posted by Bob Cowan at 22:17