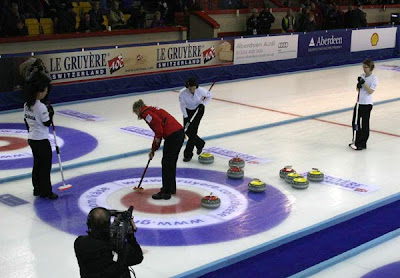 I've spent the past ten days in Aberdeen, at the Le Gruyere European Curling Championships. It was an enjoyable experience. Looking at the event as an outsider, I would have to say that it has to be considered a success. Yes, there were some hiccups along the way, but the 'big picture' was of a job well done, and George Esson and his local organising committee should be well satisfied.

The last stages of the competition had some great close exciting games, all going down to the last stone. In the women's final, Switzerland's Mirjam Ott had to cut the four foot to force an extra end. Andrea Schopp is ready at the tee line to sweep as it seems to be too heavy entering the house. 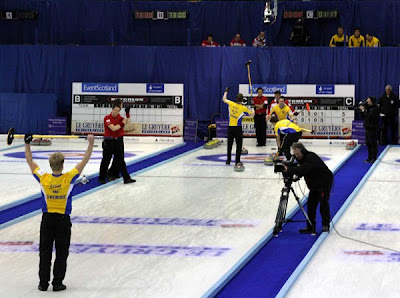 Niklas Edin raises his arms as his last stone is right on target to grab the men's title from the Swiss. 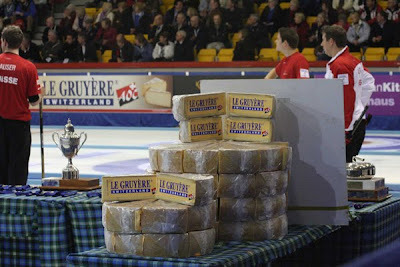 Curling has few major sponsors. Le Gruyere AOC has been an excellent title sponsor of the European Championships for a number of years now. The company had a big presence at Aberdeen, and I've become rather partial to the cheese! 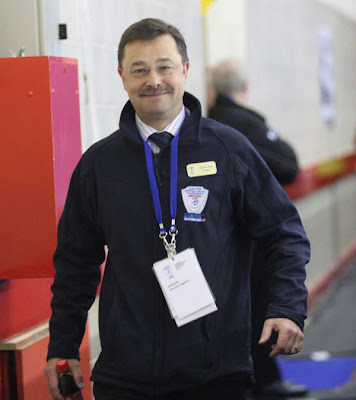 I've already applauded the efforts of the ice techs, the umpires, the staff at the Linx and at Curl Aberdeen, and all the volunteers. The local organising committee (see here) all had their own areas to look after. It's wrong of me to single out any one of these. Most featured on the blog at different times, and it was good to be working with them. David Jack (above) was in charge of 'facilities', and hence was the one troubleshooting when things went wrong or needed to be changed at the Linx. I didn't know David before, but now I've seen him at work, he gets full marks in my book. Well done. 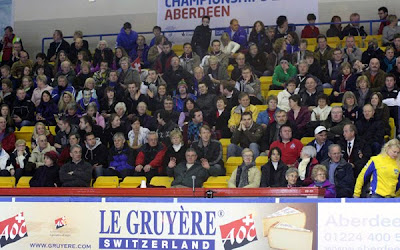 There was not a bad turnout of fans throughout the week. Despite Scotland not featuring in the final games, the stands were full enough, with just a few empty seats. And they were a knowlegeable and enthusiastic audience too. I look forward to learning how successful the event was financially. This was the first international event in which the Royal Club was a partner. Hopefully the RCCC Board will find that it was a success from their point of view and that Scotland will bid for other big competitions in the years ahead.

A final word has to be on the success of Curl Aberdeen as the venue for the B Divisions. With thirty-one teams competing there, the place was buzzing, the food was good, the viewing facilities excellent, the atmosphere friendly. Congratulations to Tom Brewster and Paul Martin and all the staff and helpers there. I visited as often as I could, and would have liked to have seen even more. The B Divisions are often ignored by the media, but this is where the future of the sport in Europe was on show.
Posted by Bob Cowan at 12:02