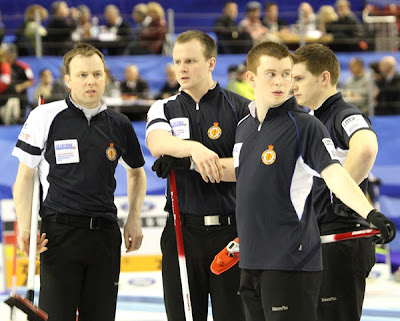 In Basel this evening at the World Men's Championship, Scotland beat China, skipped by Rui Liu, this team sitting above the Scots in the ranking before the match with five wins to Team Brewster's four.

The Scots were 7-5 up in the tenth, without last stone. Tom played an excellent freeze with his last, leaving the Chinese skip an almost impossible double to count two for the tie. But he only counted the one. Game to Scotland.

China, Sweden and Scotland are all now on five wins from seven games. Canada is undefeated.

I enjoyed seeing a couple of ends of the New Zealand v Czech Republic game on the Eurosport Player. Pete de Boer's side won this one, and Scotland 2 (!) is now on four wins from seven, the same record as Norway.

The scores, standings, and shotmaking percentages are all here. Mike Haggerty's reports are on the Royal Club website here. More general reports are here. Photo galleries are here. Highlights and interview videos are on the WCF YouTube channel here. John Brown's Toothy Tales from Basel are here.