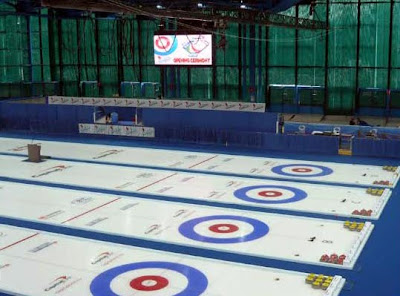 Much as I would like to be, I'm not in Cortina for the Capital One Men's Curling Championship. So I've been following things on the internet and on the box. I was horrified to learn that during last night's opening ceremony one of the performers was seriously injured. The story, in Italian, is here.

Towards the end of the ceremony, abseilers came down from the ceiling of the Olympic Stadium. One was carrying the ceremonial first stone in a backpack. He had problems with his equipment and fell. He survived the fall but apparently has a broken pelvis. The opening ceremony was halted immediately.

First games got underway this afternoon. Scotland beat Norway in the tenth end of their first round tie. Thomas Ulsrud was not playing. He has had to return home due to a family illness, see here.

Find all the results here. And the full list of teams is here. Mike Haggerty's reports are on the Royal Club website here.

The photo above, taken from the official website photo gallery here, shows the rink ready for yesterday's opening ceremony.
Posted by Bob Cowan at 15:58