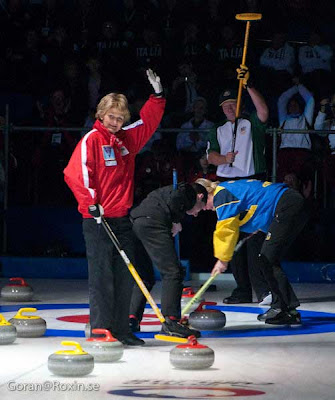 Even though there are no Scottish teams in Chelyabinsk, I am keen to learn more of the World Seniors and World Mixed Doubles Curling Championships which are being held for the first time in this fascinating part of the world. Today has been frustrating as the 'official' website has been down.

However, Joanna Kelly, the World Curling Federation's Media Relations Officer, has sent a release indicating where to find results and further information.

The place to look first is now here.

The Mixed Doubles amended draw and results is here.

The Seniors amended draw and results is here.

Detailed line scores of games played so far are here.

Especially interesting and exciting is that there are photos from the event here.

And I encourage you to take some time to look at Goran Roxin's galleries of pics, here, especially those around the city and of the opening ceremonies. That one of his photos at the top of the post. I think it is the reaction to John Brown's stone (see here)! Goran is competing for the Swedish men's team.
Posted by Bob Cowan at 20:10