Isobel Waddell, Elma McCulloch, Kathleen Scott and Lynne Stevenson, as Scottish Senior Champions 2010, have their first game in the World Seniors in the Russian city of Chelyabinsk on Sunday. They meet Japan first of all, in the nine-country competition.

Keith Prentice, Lockhart Steele, Robin Aitken and Tommy Fleming face the Estonian team in their first game on Sunday. Seventeen countries are signed up to compete for the men's title, playing initially in two sections. The draws can be downloaded from here.

The World Mixed Doubles Championship is being played alongside the Seniors' Championships. Logan Gray and Kay Adams are representing Scotland. They start their campaign against Finland on Sunday. Twenty-six countries are represented at the event, according to the draw which can be found here. Three sections. 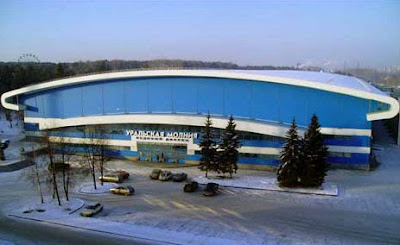 The events will be held in the Ural Lightning Ice Palace in Chelyabinsk, opened in 2004. The Ice Palace is usually a multi-sports facility including an Olympic-size 400-metre speed skating track, and an ice hockey rink, used for figure skating and short track, and curling. The total ice surface area is 10,540 square metres.

If you have a Facebook account you can see photos of Mark Callan and the ice crew getting the rink ready for the world events here. Fourteen (no, that should be FOURTEEN) sheets of ice have been laid out side by side for the event. Must be something of a record! And a challenge for the ice techs!

The pic of the arena is from the official website.
Posted by Bob Cowan at 00:49