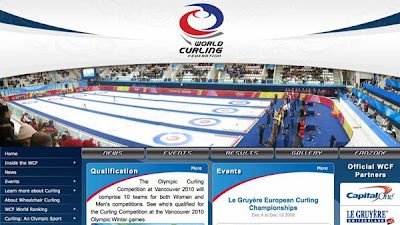 The website of the World Curling Federation has had a makeover, see here. 'Much improved' would be my verdict. Curling's top curling organisation should show a good face to the outside world, and the previous effort was in need of an upgrade. Well done to the organisation's new media relations officer, Joanna Kelly, for pushing this through.

I note that the important section containing all the records of World and European competition has been retained. These are certainly the reason I visit the site so frequently.

The site now has a Photo Gallery and a Fanzone. The latter currently has 'WCF wallpapers' for you to download to your PC screen, although why anyone would want to have a photo of an arena with half empty stands, or indeed a curler with her hand on the ice, on their screens beats me. Not really the image of the sport that we should be promoting, in my opinion! But the idea is there. I wonder what is planned for the future of the Fanzone?

In recent news, Regina, Saskatchewan, is to host the 2011 Ford World Men's Championship (see here for the full release). It will be the third time that the World Men’s Curling Championship has been held in Regina. In 1973, Sweden won the Air Canada Silver Broom, and in 1983 it was won by Canada's Ed Werenich. I remember it well. We went 6-3 in the round robin, but still had to play tiebreakers to reach the semis, and sadly lost both. Best memory from all these years ago was the hospitality and friendship of the residents of Creelman, who hosted all the Scots on 'International day'. See nostalgia!