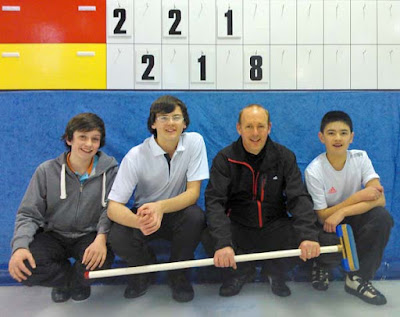 Airleywight CC has three new junior members this year and they decided to enter the Tummel League (Atholl Province) to give them experience and more club game time. Robin Brydone skipped some games with successful results, alongside Callum Kinnear, Andrew Brown and a responsible adult.

Fast forward to the last league session of the season and Airleywight will have won the league if they win the game. The season plan was to give twelve year old Callum his first taste of skipping the team in that game and the decision was made to keep to that plan.

As can be seen from the scoreboard the young lads plus Derek Bridie were holding their own against the older heads (names deleted to save embarrassment) until the sixth end. Andrew and Derek had put stones in the house. The opposition second put one into the centre but there was a narrow port to get it out but it needed a hack-weight inturn to slide narrowly past a centre guard and tap it out. Robin at third did this perfectly. The opposition skip played his last stone to try and freeze onto the stone at the back of the two foot (as the tee is at Perth). His weight was good but the stone stayed out slightly. Callum had a barrier weight inturn to come slightly across the front of the stone to get it out and not move any of his and he played it perfectly!

Handshakes were offered by the opposition who were gracious in their praise.

For the record, the team was Callum Kinnear (skip), Robin Brydone (third), Derek Brydie (second) and Andrew Brown (lead). Ages? 12, 15, over 21, and 13 respectively. That's them above, L-R. The stone placement is in the photo below. 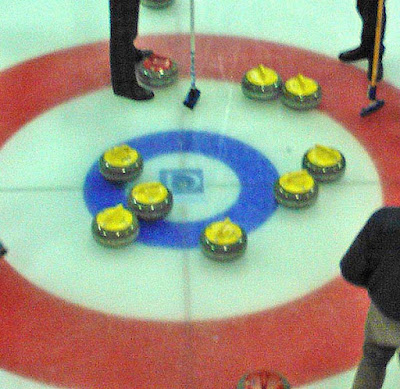 Thanks to a proud father, Tom Brydone, for the story, and to Dave Brown, equally proud, for the photos.
Posted by Bob Cowan at 10:37