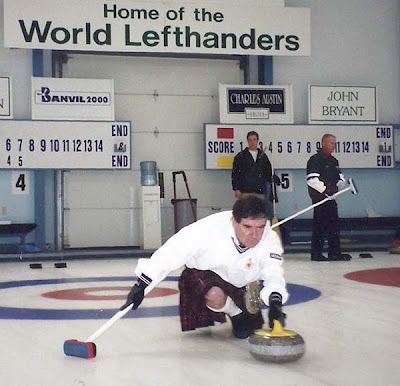 The 39th Men’s and the 33rd Ladies' World Lefthanders Championships will take place from March 29 to April 1, 2012, at the Oakville Curling Club, which is about twenty-five miles west of Toronto.

David Edwards explains, "There are usually around 44 men’s rinks and 16 ladies rinks competing for the championship. These teams are from USA, Canada and Scotland. Scotland will again be represented by David Edwards (Merchiston & Corstorphine curling clubs), Ian Parkinson (Heart of the Highlands CC), and Ian Mackay (Dornoch) and newcomer Wilson Mitchell (Carnell CC). Ian Mackay’s wife Maureen will also be playing in the ladies' section with three other Canadians.

All players must deliver the stone with their left hand. Over the years there have been I think two 'righties' who have played using the left hand. All handshakes are given with the left hand and there can often be penalties such as payment for a round of drinks for forgetting this.

Canadian participants travel from places as far afield as Winnipeg, Nova Scotia and Quebec and Americans from Boston, Chicago and Detroit. One of the recent US tour members, Paul Badgero, plays in this competition.

David Aitken was the first Scot to take part at a time some years ago when he was working in the USA. During the 2002 US tour of Scotland I played against Sam Williams from Broomstones Curling Club, Boston, who suggested that I come over to the 'Lefties'. I was able to enter as an individual and skipped a rink of three Canadian lefties. The following year and each year subsequently a Scottish 'Corriefisters' rink has gone to Oakville to participate."

The Royal Caledonian Curling Club, in its wisdom, does not recognise this World Championship 'because there are no playdowns to establish which team should represent Scotland'. David Edwards’ response is that he has been unable to find another lefthanded rink to challenge him!

In 2011 the Corriefisters achieved their highest ranking of twelth out of forty-four men’s rinks.

It all sounds great fun! Hopefully David Edwards (Corriefisters) and his namesake David Edwards (alternate in the Tom Brewster rink) will have success in their respective championships in the days ahead.

Photo of David Edwards is courtesy of himself.
Posted by Bob Cowan at 09:31