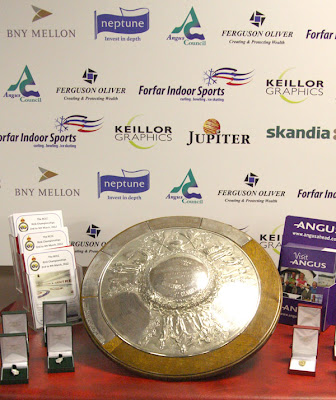 The famous Rink Championship trophy awaits the 2012 winners. Note too the sponsors that Mike Ferguson, owner of Forfar Indoor Sports, has attracted for the event.

One end was key, the fifth. Perth landed a big four and although the Kinross team came back strongly, Kenny and his team had a three shot lead coming down the last. It was enough.

In the semi, Sutherland's team had beaten Hugh Neilson (Lanarkshire) by playing an angle raise takeout with his last stone in a tied game.

Kinnear's side had come through their semi against the John Penny team (Aberdeen), when Penny was too long with his last stone draw which needed to touch the four foot to win the game.

All the results and standings are here. 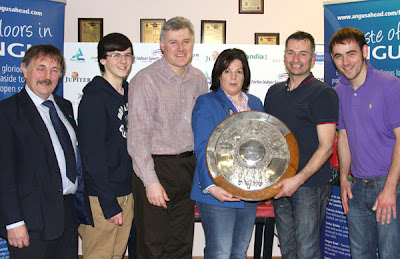 Bob Myles, the Leader of Angus Council, and Claire McLaren, representing the Royal Club, made the presentations. Bob, a curler himself, has competed in the Rink Championship many times in past years, and played one game this weekend! L-R: Bob Myles, Robin Brydone, David Brown, Claire McLaren, Kenny Kinnear and Peter MacKay.

(Double celebration in the Kinnear household this weekend, as young Callum Kinnear was in the winning U-14 Slam team, see here.) 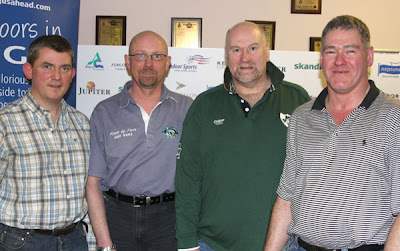 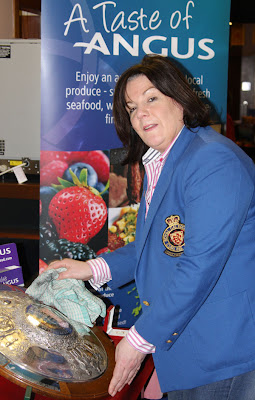 We liked this one, when we caught Claire McLaren, Royal Club Ladies Branch President, giving the trophy the once over! 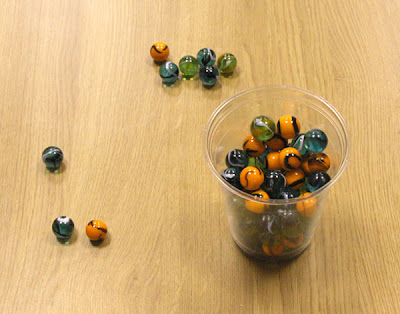 And a final thought from Forfar, which will have a resonance for all the competitors. Here are some of Mike Ferguson's marbles, which he had misplaced!

Actually, what an innovative idea to have marbles as the local 'currency'. I wonder if they will be acceptable behind the bar at Greenacres, or Stranraer?