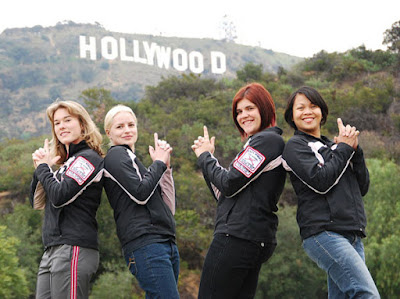 Now, do you know what 'cornhole' is? I didn't either, until recently. Here at Skip Cottage we like to think that the blog can occasionally be educational, so I'll share my recently acquired knowledge, gleaned mostly from a well known online encyclopedia, here. According to Wikipedia, cornhole is a lawn game in which players take turns throwing bean bags at a raised platform with a hole in the far end. A bag in the hole scores three points, while one on the platform scores one point. Play continues until a player reaches the score of 21.

Cornhole is also known as bean bag toss, baggo or bags, apparently. I imagine if you took part in the Washer Toss Championships at Greenacres on the occasion of my 60th birthday (reminder here), then you will have no problem with cornhole.

Or you could get some lessons from the Bond Girls who will be competing at the Glynhill Ladies International at Braehead, January 20-22. The Glynhill is Scotland's only women's Curling Champions Tour event, and attracts top international teams.

'Bond Girls at Braehead'! I can see the headlines now. Who are they? They are a Los Angeles, Southern California, based curling team. They have their own website here, and they have a blog, a Facebook page and a Twitter feed if you want to become a fan. They certainly have embraced the idea of promoting themselves, and recently won a competition to have their photo on billboards throughout LA. I must admit that I've followed their activities for a while. Don't be surprised, you don't really expect that a team that sports pink tartan mini kilts would escape my notice, do you?

And now they are coming to Scotland, and I'm sure they will be warmly welcomed at Braehead come January. They have recently been fundraising for their trip. See here for details of their Cornhole competition, their Third Annual Bond Girls Poker tournament, and silent auction.

The team haven't been curling for long, but have already made their mark in US curling. Edith Loudon, who handles the team invitations for the Glynhill organising committee, has played against the Bond Girls a number of times in California. (I always wondered why Edith was so good at Texas Hold 'Em!) Seriously, Edith felt that the next step for the girls would be to play at Braehead, and give them the opportunity to see what Scottish and European curling is all about. Hence their invitation to the Glynhill. 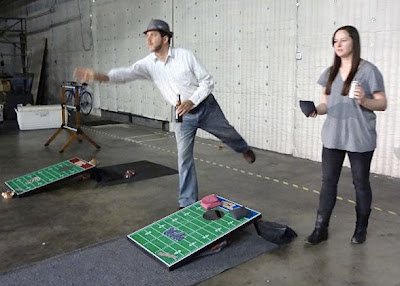 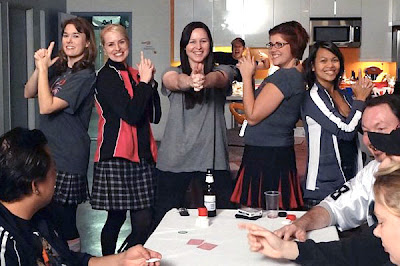 The Bond Girls at their poker tournament, with fifth player Katie Kerr in the middle.

Many thanks to Kevin Carpenter for help with this post and for sending the photographs.
Posted by Bob Cowan at 10:22