Those of you with neat and tidy minds will applaud, as I do, the recent decision of the RCCC Rules Review Group to round up the odd measurements relating to the playing area on a curling rink by removing the old imperial measures. For example, the old six foot circle (which had to be drawn as 182.9 cm radius) will now simply be 180 cm, with the inner circles drawn at 120 cm (rather than 121.9 cm) and 60 cm (rather than 61 cm). The innermost circle will have a radius of 15 cm (rather than 15.2 cm), except of course at the Dewar's Centre in Perth where the 'button' will have a 20 cm radius.

A spokesman for Kays of Scotland, curling stone makers, said, “The use of smaller stones will help preserve the diminishing stocks of Ailsa Craig granite.” 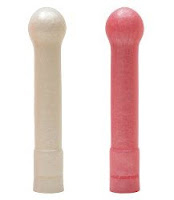 What excites me most though, in looking towards the future, is the way technology is set to influence the game. A new laser measuring device will do away with the old fashioned measures, the six-foot stick, and the last stone draw measure. The new LMD looks something like a stick of rock (see left), and is inserted into the hole at the centre of the circles. Inside, the rotating laser registers any stones within a 200 cm radius and sends the results wirelessly to the chief umpire's iPhone.

The new measuring device is small, and so easy to use.

The photo shows early prototypes of the LMD, and inexpensive versions based on this design will be available for ice rink and club use, in fluorescent pink or yellow colours, and a variety of flavours. 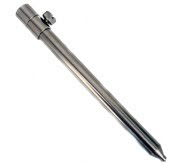 The competition version of the laser measuring device is shown on the left. Few will lament the fact that there will be no longer any need at major international championships for 'the ceremony of the measure' where the big measure has to be carried - sometimes the full length of the rink - to the umpire who is to make the measurement, with consequent delay to the game. Now the game umpire will simply be able to whip out an LMD from his or her pocket, plug it in to the hole, and within seconds an accurate reading can be obtained.

Tests have shown that the laser device is accurate to many more significant figures than even the best competition measure currently in use.

Costs are yet to be revealed but it is not thought that these will be prohibitive.

But the technological innovation which is set to have the most profound influence on the sport of curling has been in development for the past couple of years in Scotland. I have seen the prototype in action, and it really works. It is a new brush which has the opposite effect to regular sweeping. The harder you sweep with 'The Scottish Curler', the slower your stone travels and the more it curls!

Professor Dustin McWillay, of the Department of Particle Physics of the University of the Highlands and Islands in Inverness, who discovered the properties of the new seaweed based fabric which is key to the new broom, said, “Other than the fact that the interaction of the fabric on the ice appears to change the molecular structure at the surface, we don't really know why the curling stones react the way they do."

Prof McWillay's research student, Iona Fallback, said, "Our experiments are ongoing, thanks to a grant from sportscotland. Our next aim is to develop a broom which will slow the stone, without having it curl more. That would be great for playing guards on swinging ice.”

The University of the Highlands and Islands has already been granted a patent for the fabric used in 'The Scottish Curler'. Details of the fabrication process have yet to be published. But local British Curling Supplies proprietor Tom Pendreigh has been involved in testing the prototype brushes at the Inverness rink in strict secrecy.

Tom says, “We thought originally to have just the one brush, with a regular head at one end and a 'The Scottish Curler' head at the other end. However, in practice this proved to be really very very dangerous. When the skip shouted for the sweepers to change, eg from 'Hurry!' to 'Brake, brake!', swinging the brush around often resulted in injury to the other sweeper.

In testing we had several cases of concussion, a broken jaw, and my son Tom jnr hit me very hard in the goolies when we were both sweeping one day. So we decided to think about sweeping with 'The Scottish Curler' in a different way.

We started with the fact that the sweeper furthest away from the stone has a minimum effect anyway. So we decided on one brush - one sweeper. We equip one sweeper with a regular brush, and the other sweeper with 'The Scottish Curler'. Two sweepers as normal, but each with a different broom.

A team's accuracy in playing all the angles and double takeouts is improved. But it takes a lot of practice in calling each sweeper on and off when required."

I just love the idea, and I'm certain that it will re-energise the sport. In the future the game will be all about communication, even more than today, and the roles of the sweepers are going to become even more important. If a car has both accelerator and brakes, then why can't we have 'go faster' and 'go slower' brooms for curling!

We're just at the very beginning of learning how the game will be played in the years ahead. There are lots of questions. How do you decide who will be the 'fast sweeper' and who will be the 'slow sweeper'? Will club curlers now have to purchase two brooms depending on the role they will play in a club game? Will there be a version of the game ('alternative curling') where only 'The Scottish Curler' brushes are used, perhaps run in parallel to regular curling in the Olympic Games? And who will play with what in Mixed Doubles and Pairs?

That's my photo of the new 'The Scottish Curler' pad on the left. It is only available in this bright green colour to distinguish it from regular broom pads (it might be considered as cheating if a team was to be using 'The Scottish Curler' without telling their opposition) and to reflect its alginate origins. I've discovered where the special seaweed for the fabric is being grown and harvested, but I've been asked not to reveal the location. Let's just say it is somewhere on the west coast of Scotland, and its use will not have a detrimental effect on the environment.

The European Curling Federation is set to debate the use of the new broom soon, if the organisation can obtain a quorum at its next meeting. If given approval, expect the Scottish teams to be using TSCs at the European Championships in Moscow later this year.

However 'The Scottish Curler' brooms are not likely to be on sale to club curlers until April 1 next year.
Posted by Bob Cowan at 00:03