It made me smile the other day when I noticed that a group of enthusiasts had curled on a frozen lochen high up on Mt Olympus in New Zealand, as part of the Real New Zealand festival. The story, with photo, is here. Is 1800 metres a record? Not, according to this post on the Curling History blog from August 2008. But I'm sure all involved had great fun.

And talking of mountains (tenuous link), you will remember I recorded the efforts of wheelchair curlers Aileen Neilson and Michael McCreadie who pushed a marathon distance to raise money for charity on August 14, see here.

Well they have been in touch to say HUGE THANKS to all who contributed in any way towards their efforts. They say, "We have been overwhelmed by the kindness, support and generosity we received and delighted to say that we have raised £1200 for Leukaekmia and Lymphoma Research and £1810 for The Beatson Cancer Care Centre."

Well done to both. The photo below, courtesy of Aileen (by an anonymous photographer), is of the pair crossing the finishing line in a shower of champagne! Brilliant pic! 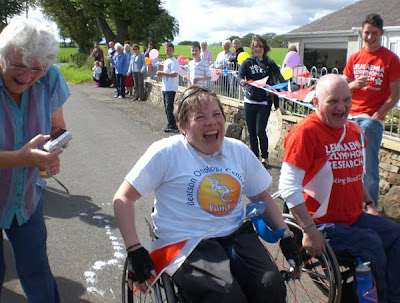 And finally to Canada where I note that the David Murdoch team narrowly lost their first game in The Shoot-Out in Edmonton, Alberta. The linescores can be found here if you want to follow the team's fortunes over the weekend.
Posted by Bob Cowan at 10:10