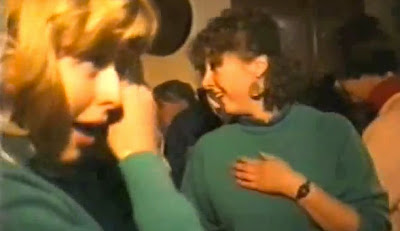 Today's post was stimulated by the fact that the Greenacres Junior Masters, the first junior competition of the season, goes ahead this coming weekend. I look forward to seeing some of the play, and it is always great to return to the rink where I spent so much time in the 1980s.

Then, the Renfrewshire rink staged two weekends for juniors, a boys' competition and a separate girls' event.

Last year I met Diane Bell (nee Lyle) who mentioned to me that her mother had rescued a videotape of the final of the 1987 Junior Ladies' Invitation. It came as a surprise to me that video footage of the event existed, as I had no recollection of anyone filming on the final day. (And I still haven't. It's amazing how memories can be perfect in some things, and incomplete in others.)

The proof duly arrived from Diane in the form of a DVD. I've edited a few minutes from this, uploaded two clips to YouTube, and hosted the story on the Curling History blog. The link is here. Enjoy. And many thanks to Diane. That's her above on the left of a screenshot from the video. Why is she in tears?

I wonder how many juniors playing at Greenacres THIS weekend had mothers competing in 1987!
Posted by Bob Cowan at 10:41