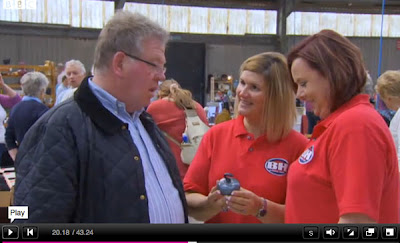 Something different for everyone today. Are you a fan of Bargain Hunt, the lunchtime television programme where two teams buy items at antique fairs and then try to resell them at a profit at auction? It may not be the Open University, but over the years of watching the programme I've learned a little about the world of antiques and collectibles. And it is just good fun.

Rarely though does something appear on the programme that I know anything about! That's Philip Serrell above, who was Wednesday's expert with the Red Team. The programme was filmed at an antiques fair at the Royal Cornwall Showground in Wadebridge. Running out of time, they bought a little Beneagles curling stone whisky miniature, empty of contents, for £4. 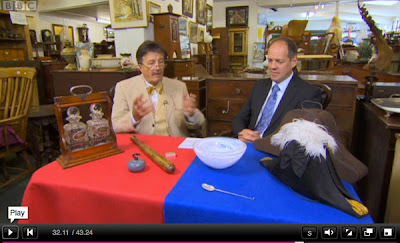 The programme presenter Tim Wonnacott discusses the teams' buys with the auctioneer at Jefferys Auctions in Lostwithiel, whose opinion it was that the wee decanter was of not much value. Indeed he noted that he would not usually sell such a thing on its own, but rather put it in with other low value items. It sold for £12. I call that a result!

I remember - despite it being a VERY long time ago - when I first added one of these whisky miniatures to my own collection of curling memorabilia. There were, and are, very common. Initially I thought, "When you've see one, you've seen them all." Not so. With time, I realised that there was a whole realm of research to be done. Wednesday's programme has prompted me to document what I know, and what I don't, about miniature whisky curling stone decanters. My dissertation is on the History Blog here.

Now you all know just what a curling nerd I really am, but if you know something about Beneagles curling stone miniatures, then please get in touch!

The photos above are from the BBC iPlayer recording of the programme, which can be accessed until October 5, see here.
Posted by Bob Cowan at 08:47