Our wheelchair curlers overcame a number of problems on their way to finishing on the podium at the Danish International Wheelchair Cup last weekend. Ten teams, from Scotland, Russia, Norway, Germany, Denmark, Finland and the Czech Republic, took part in the event at the Taarnby Club. A four game competition was used for ranking and then the teams played off, 1 v 2, 3 v 4, 5 v 6, 7 v 8, 9 v 10, in their fifth game.

Scotland 2 defeated the Czech Republic in the gold medal game and Scotland 1 defeated Denmark in their ranking final.

It was a good weekend for our new Head Coach, Tony Zummack, who reports, "The squad was quite enthused about starting the season on a positive note. We had some challenges with luggage, transport and even an injury to squad member Jim Gault that caused him to come out of a game and miss the remaining two games on Sunday.

At a squad meeting on Saturday night the Gold team (Aileen Neilson, Tom Killin, Gregor Ewan and Angie Malone) decided that they would play with three curlers for the final two games, and that Gregor would move over to the Silver team (Michael McCreadie, Jim Gault, Ian Donaldson, Gill Keith) due to Jim being unable to finish the event. This squad first attitude allowed us all to realize a podium performance by all eight athletes in the Wheelchair Performance Program."

Thanks Tony, and a 'well done' to all.

The next event in the wheelchair curling calendar is the Kinross Wheelchair Curling International, October 18-20.

The organisers report that this competition will have a full complement of ten teams, two from Canada, one from Norway, one from Switzerland, one from Latvia and two from Russia. Three Scottish teams will take part including two teams made up from the eight members of the Wheelchair Performance Squad.

Archie Bogie writes or behalf of the organising committee, "This line up should make for a good competition and we look forward to a great display of wheelchair curling and competitive games on the excellent Kinross ice conditions. 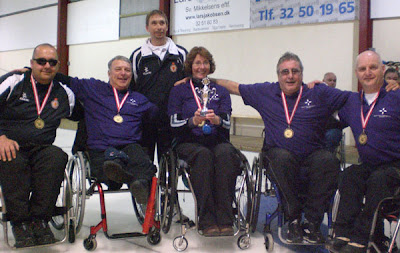 L-R: Gregor Ewan, Ian Donaldson, Gill Keith, Jim Gault and Michael McCreadie, with coach Tony Zummack behind. Thanks to Aileen Neilson for this pic from Denmark.
Posted by Bob Cowan at 13:15