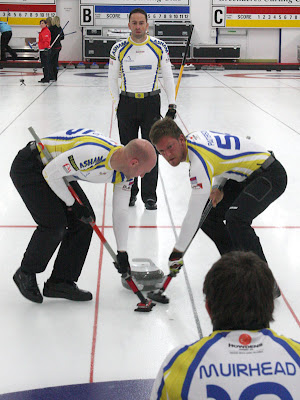 Just to complete the story of the weekend, I see that David Murdoch, Glen Muirhead, Ross Paterson and Richard Woods lost their quarterfinal match against the Randy Ferbey team at the Point Optical Curling Classic at Saskatoon yesterday. Tied in the final end, David Nedohin, who plays the last stone for the Ferbey team, made a hit and stick for the Canadian 7-6 win. Mike McEwen won the event.

Team Murdoch now head directly to the third of the Curling Champions Tour events of the 2011-12 season, the Swiss Cup Basel in Arlesheim. Tom Brewster and Logan Gray are the two other Scottish sides in this thirty-two team triple knockout.

The photo is of Team Murdoch practising at Greenacres in August and is © Skip Cottage.
Posted by Bob Cowan at 09:03