Eve in the news 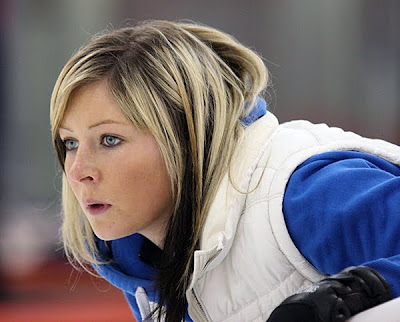 Eve Muirhead is in the news. No, not because she was bitten by a wasp (see here, and in multiple other places online, and below) but because she is to be an Athlete Role Model for the inaugural Winter Youth Olympic Games taking place January 13-22 in Innsbruck, Austria.

The International Olympic Committee has today published its list of role models, featuring a number of star athletes nominated by the International Federations taking part in the Winter Youth Olympic Games and members of the IOC Athletes’ Commission, led by Chairman and Olympic sprinter Frank Fredericks. Eve Muirhead and Uli Kapp are the World Curling Federation nominees. The full press release is here.

What is an ARM's role? The release says, "The ARMs will spend time with the athletes, answering their questions and providing tips on everything from healthy eating to training regimens. The ARMs will also participate alongside the athletes in the Culture and Education Programme, which will focus on Olympism and the Olympic values, skills development, well-being and healthy lifestyles, social responsibility and expression through digital media. The ARMs will attend the competitions, visit the Youth Olympic Village and feature in 'Meet the Role Models' forums designed to inspire and educate the participants with personal accounts of their own dreams and experiences, and the challenges they have overcome. In addition, a dedicated Athlete Role Model lounge in the Youth Olympic Village will be available for the young athletes to drop in and ask questions first-hand to their icons."

Great Britain's curling team for Innsbruck is in the process of selection. Shortlisted athletes attended a special session at Greenacres last weekend, and the successful four (two girls and two boys) will be announced soon, once their selection has been ratified by the British Olympic Committee. See a past blog post about the WYOG here. John Brown also talked about the Games in this post.

I note too that the profile of the Youth Olympic Games is increasing. I read this article on Monday about Glasgow's interest in staging a summer YOG in 2018.

Ah yes, the wasp! I am assured that Eve's eyesight is now back to normal as she flies out to Oslo today to compete with her team in the Radisson Blu Oslo Cup.

There is no update on the medical condition of the wasp.

Eve's photo is © Skip Cottage and is from the Scottish Junior Championship at Curl Aberdeen last season.
Posted by Bob Cowan at 14:17