Well, the secret can now be revealed. Three Days in January is the name of the new James Bond film, which will start production once Skyfall is released later this year. Much of the film is to be shot in Scotland.

The Braehead curling rink is to be turned over for the casting of film extras this weekend. I hear the producer wants girls that can really curl for this new film, unlike the feeble attempts on top of Piz Gloria in On Her Majesty's Secret Service. Apparently some of the best women curlers in Europe and Scotland are trying out for the parts. Details are here.

It's all a bit sketchy at the moment. Several undercover Hollywood agents (I believe) slipped into Scotland from Los Angeles on Monday, by way of Paris. Following a tip off, I lay in wait for the arrival of the group at Edinburgh airport. But would I recognise them? I stood with a sign that simply said 'Bond Girls' which I hoped they might recognise. My word, did I get some funny looks from passengers and others in the International Arrivals Hall.

Really I needn't have worried. There was no mistaking that Hollywood was coming to Scotland when the party of four women, two men, a baby, and a pink broom bag appeared past Immigration.

Marissa Messier, Cindy Wood, Jennifer Gamboa and Donna Umali Mendoza would not admit to me why they are REALLY in Scotland. They SAY they are here to play in the Glynhill Ladies International, but they don't know I'm revealing my doubts about them on the blog tonight. I am convinced they are doing research for the new Bond film.

The casting of more Bond girls may be just one of their priorities. They are also location scouting. Some of the group have been checking out glamorous places in and around Edinburgh which might feature in the new film. Locations like Dalhousie Castle, a 13th century fortress set within acres of wooded parkland on the banks of the river Esk, with a spa, and a library with a extensive collection of books where you can have a drink from the ‘secret bar’ next to the open fire. Yes, that has to be one of the film locations.

Who will be the next James Bond though? I think I know. Two of the LA group, and the baby, were headed for Inverness to meet up with Olympian Ewan MacDonald. Move over, Daniel Craig, Hollywood is returning to the Scottish option, so successful with Sean Connery. I have no doubt that if Ewan gets the part there will not be the controversy there was when Daniel Craig was cast as Bond for Casino Royale. As long as he can say, "My name is Bond, James Bond," in an Inverness accent.

I believe that Edith Loudon may be taking over from Judi Dench as M.

What about the villains? I've no idea, but wait, who are the umpires at the Glynhill? And do we need a white cat?

Casting starts at 08.00 on Friday, January 20, and the best curlers, if not the Bond Girls of the future, will be on view in the final which is scheduled for Sunday, January 22, at 14.30.

More on this story as it evolves over the weekend. 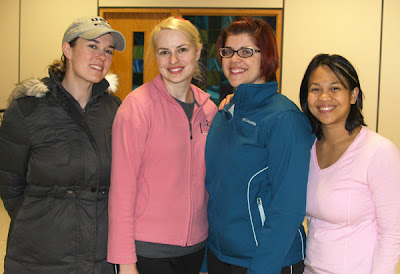 Marissa is named after (or may actually be) a Playboy bunny and produces 'behind the scenes' material for Walt Disney Studios. Or is this a cover?

Cindy says, "I have a small sewing business." Don't believe a word of it. She's also a left handed Canadian.

Jennifer is good with money. Other people's. Husband Matt (or is it Luke, John, or Peter) is also a curler, with Team Zissou, but I think he's really the team's bodyguard.

Donna, an assistant editor, actually admits to wanting to write a film script about curling! She's brought her husband Paul, Team Zissou skip, to help her 'research'. Or is he really the new film's producer? Their six month old baby Bond girl (Leianna) is already a world traveller, and is to help with casting. Apparently the new James Bond has got to be good with babies! 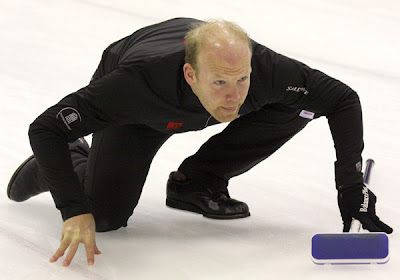 Ewan MacDonald. Could he be the new Bond?