European Qualifying Session 4: Muirhead will be in Champery 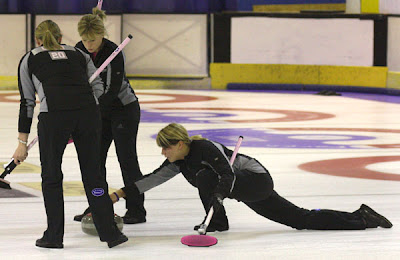 The second session today at the European Qualifying Competition at Perth was a repeat of yesterday's first round games, the second cycle of the double round robin. Eve Muirhead had Lorna Vevers back in her side for the rematch against Gail Munro. That's Lorna delivering in the photo above.

An epic battle indeed, the teams tied at 6-6 after eight. It went to an extra, with Gail holding last stone. Eve made a good freeze with her last. Gail chose not to follow and attempted a raise takeout. It didn't come off! Eve had stolen (again) at an extra end, and with that, she and her team are on their way to Champery! 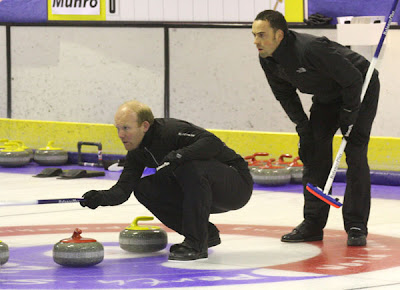 David Murdoch, one win and one loss, was again up against Ewan MacDonald, his team winless in both his previous games. This was close until the seventh end, Ewan's last stone a touch heavy with the consequence of giving David two against the head, and a 5-3 lead. Ewan tied up the scores in the tenth.

David, with the opportunity to win with a last stone draw, didn't make it for shot. Team MacDonald had stolen the game!