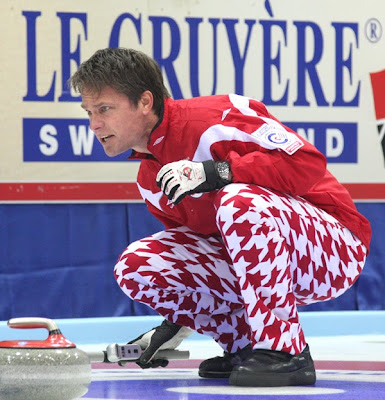 It's quite a weekend in prospect! Giving age its due, I should begin by noting that the country's senior men's teams are playing off at Forfar (twelve teams) and at Greenacres (fifteen teams) to find the qualifiers for the Scottish Senior Championships, to be held at the Lanarkshire Ice Rink, Hamilton, February 9-13.

Keith Prentice, Lockhart Steel, Robin Aitken and Tommy Fleming are the defending champions. Can they make it three in a row? Team Prentice plays at Greenacres.

The seventeen women's teams are all straight through to the finals. You can access the draws and results from this page.

Which takes us to the Ramada Perth Masters, and the reason that Thomas Ulsrud (above) is the featured photo of the post. Games begin today, Thursday, with thirty-two teams playing in a triple knockout in this Curling Champions Tour event. Ulsrud won the Le Gruyere European Curling Championship in Champery last month and the Norwegians open against Andy Cameron. The event website is here.

The photo of Thomas Ulsrud is © Skip Cottage and was taken at the recent Le Gruyere European Curling Championships in Champery.
Posted by Bob Cowan at 08:58