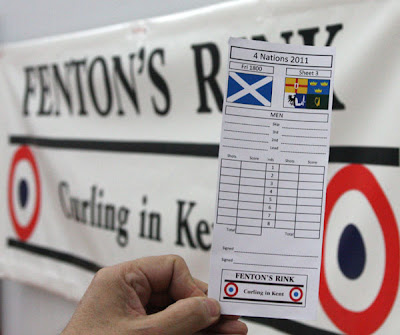 Yes, I made it to Fenton's, and what a warm welcome awaited all the competitors in the Four Nations. No effort had been spared - right down to the customised scorecards!

Where to begin? A new rink and lots of opportunity for photos. But I think I should try to highlight the Scottish teams who have made the effort to come to Kent for the weekend. Fenton's has three sheets, and three of the six games played today involved Scottish teams. 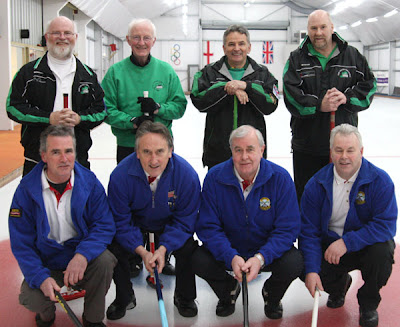 This was a Scotland-Ireland clash. The Marshall Millenium trophy is contested by one ladies', one men's and two mixed teams. Scotland now has one win in this event. Alistair MacIntyre and his team of Derek Cardiff, John McCall and Walter Barclay (from Gourock CC - that's them in the front row), beat John Jo Kenny, Tony Tierney, John Burns and Jim Dixon in the early session. 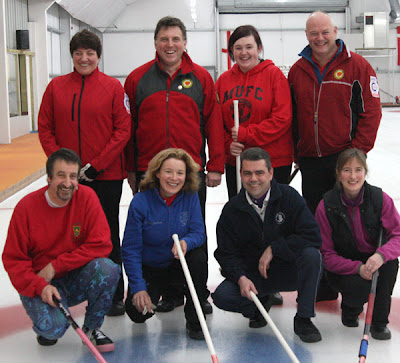 The second session tonight saw two mixed games against the Welsh. Scotland are in the front again. Stephen McClymont skipped Dawn Watson, Graeme Maguire (complete with colourful trousers) and Elspeth Burton. The Welsh fielded Adrian Meikle, Jane Robbins, Laura Beever and Andrew Robbins. I had to leave before the end to get these pics uploaded so don't know the final scores. The trophy being played for here is 'Big Bertha'! 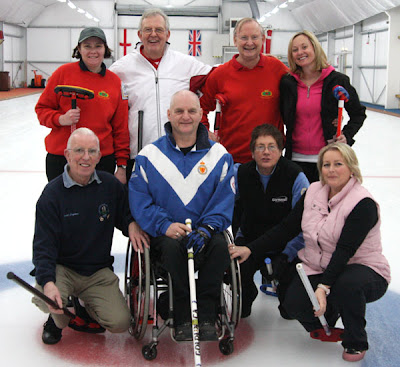 Michael McCreadie had a crack team in front of him for his mixed game against the Welsh - Liz Jamieson, Gerry Crighton and Linsey McGillivray. Chris Wells skipped the opposition with Lindsay McKenna, Michael Yuill and Lisa Peters.

Here are a few pics of the action which hopefully will give a flavour of Fenton's! 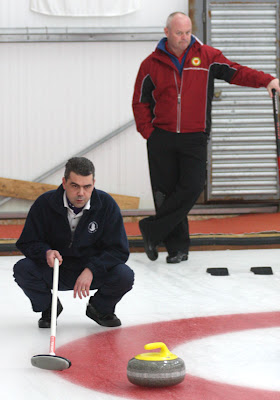 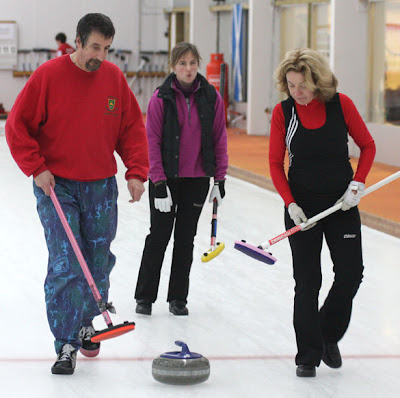 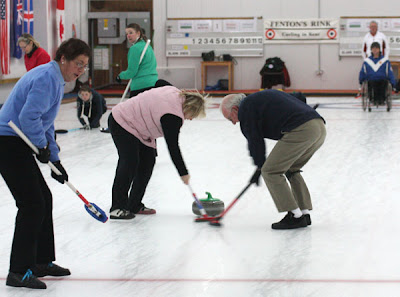 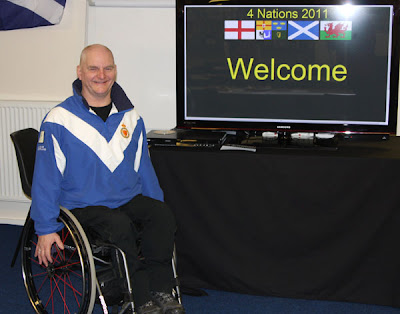 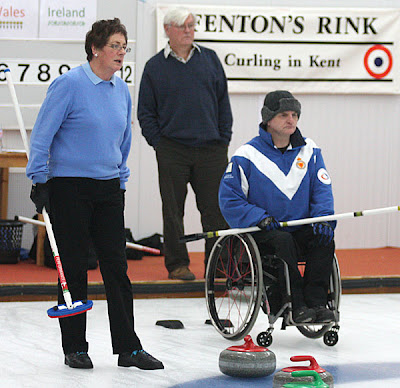 Now, seriously. HEADLINE NEWS. Do you know the woman playing the stone in the photo below? 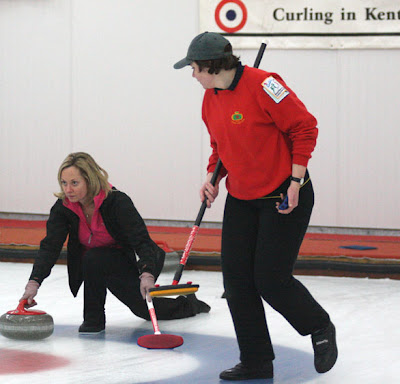 EXPAT SCOT PLAYS FOR WALES. Yep, Lindsay Kilpatrick (as she was) was still a junior when I last saw her at Greenacres some twenty years ago. Now living in Cheshire, she fancied getting back into curling and was immediately 'hired' when she turned up pretending she was 'just a beginner' at the Deeside Leisure Centre a couple of years ago. Great to see her again. 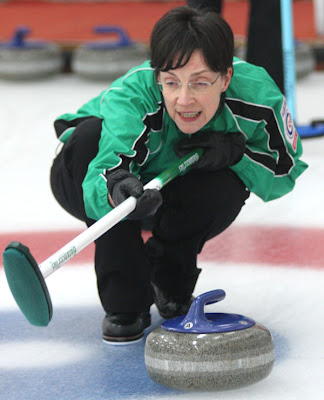 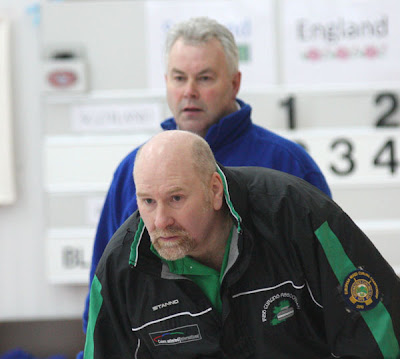 This is from the Scotland-Ireland men's game. John Jo Kenny in front, Alistair MacIntyre behind. 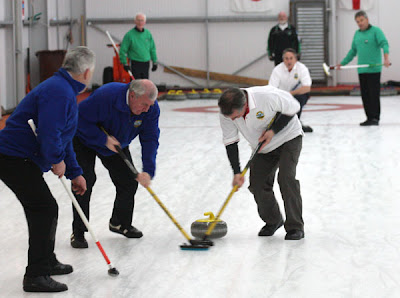 And here's the hardworking Scots in action! 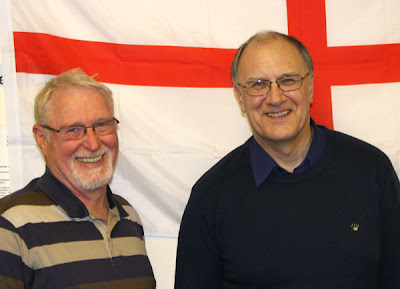 Two old friends, Robin Gemmell and John Brown. John as ECA secretary has had a lot of work to do in the run up to the event which is being hosted by the English Association. 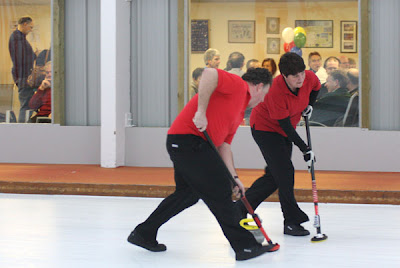 The lounge is to the side of the playing area. 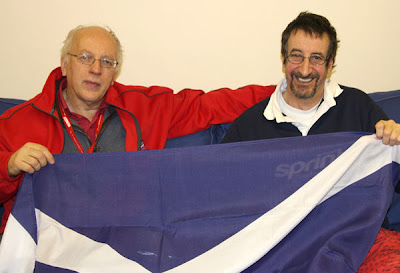 Here I am with Graeme, being completely unbiased in my support! 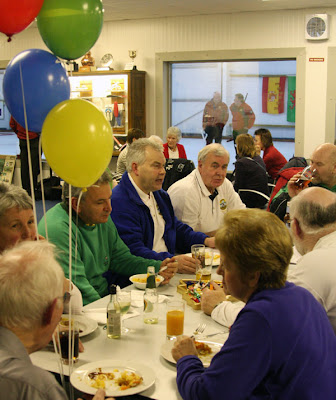 Post meal stovies as the winning Scots debrief their game against the Irish. No, the balloons have no significance! 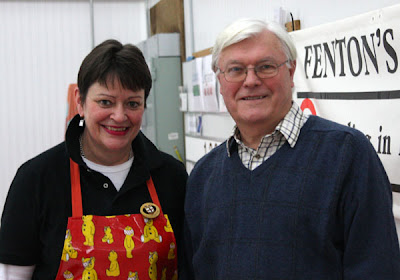 Alison Arthur, here with Ernest Fenton, is the President of the ECA, and of course was multi-tasking, hence the fetching pinny! 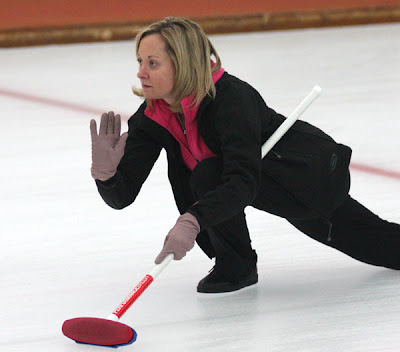 I think Lindsay is trying to practise "Live Long and Prosper!" 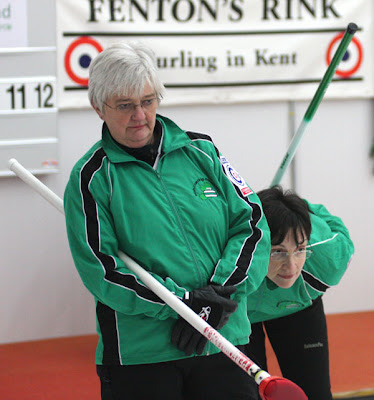 Of all the pics I took today, I liked this one the most. That's Caroline Hibberd and Louise Kerr playing for Ireland against England today.

All pics © Skip Cottage. More tomorrow. And apologies if I've got names wrong or misspelled.
Posted by Bob Cowan at 23:14