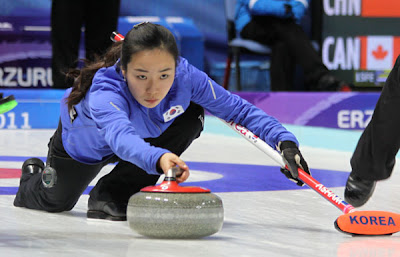 It was a brilliant fight back and Anna Sloan's GBR Women in the end thoroughly deserved their win over Ji Sun Kim's Korea in the last end. The game started with Korea having a free draw for 2 in the opening end and then swapped singles in the second and third.

GBR were beginning to get to grips with the ice which Anna said later had given a few problems early on but they soon mastered the slightly tricky conditions. In the fourth end there was reward for their persistence when Anna was given a draw for 2 and this she grabbed with both hands. Korea took a single in the fifth to lead 4-3 at the break and came back to steal a single in the sixth.

Enough was enough for GBR and having taken a single in the seventh it was their turn to steal one shot in the eighth and again the game was tied 5-5. In the ninth GBR allowed their stones to lie in a manner that gave Kim a chance of a double and two shots but she failed and only collected a one shot advantage going into the final end with GBR holding the last stone advantage. The pressure was beginning to tell on the Koreans and consistent play through the end saw Sloan lying 2 for the game with one stone to come from each skip. Kim tried to draw round front guards and bury frozen to a GBR counter but came up short and GBR's last stone was by a technicality redundant.

This now puts the Sloan GBR team in pole position on four wins along with the Russian Federation who for some unknown reason are listing Ludmila Privivkova as the alternate on the original team line-up form.

After the game Anna revealed, "The game was frustrating and we did really well to stick in for the second half." Talking of the last two ends she said "Pressure got to her (Kim) and we got her under pressure." Finally on the ice conditions Anna said she found the ice patchy, backed up by Sarah MacIntryre who said, "A lot to look at as it changes during the game." 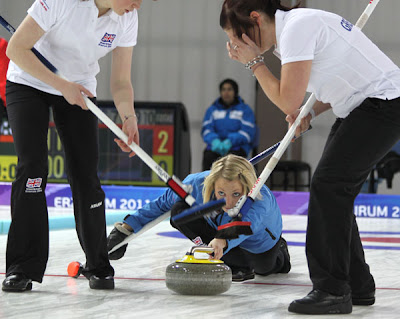 Top photo is of Korea's Ji Sun Kim. Above: Anna appears to be looking over Claire and Vicki's brooms. Photos courtesy of Leslie Ingram-Brown.
Posted by Bob Cowan at 23:00