I was pretty sure that I would enjoy my weekend at the Fenton's Rink in Kent where the Four Nations was being held this weekend. I was right. What a fun weekend it was! I knew many of the competitors from the English, Welsh and Irish squads before. It was the Scottish curlers who were strangers when we met up on Friday, but we were friends when we headed for home today.

Make no mistake, the Scots represented the best of what makes our curling special. Great fun, good sports, keen competitors. And proud to be representing Scotland in the Four Nations, at Fenton's, the first time that the English Curling Association has been able to host the competition in England for twenty years.

And thanks to all who helped make my trip south so enjoyable. 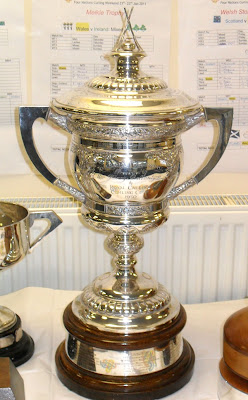 The men brought back the magnificent Tom Ballantyne trophy!

But let's start at the beginning! 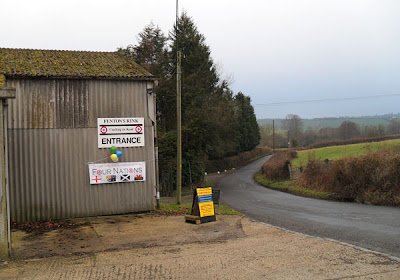 It was my first visit to Fenton's Rink, in the heart of rural Kent, not far from Tunbridge Wells. 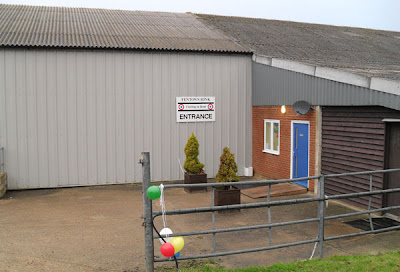 The rink entrance. What a marvellous facility it is. 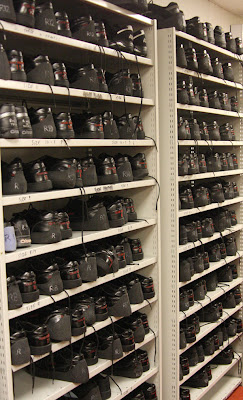 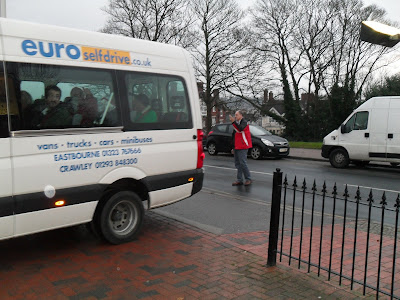 The organisers had arranged transport for the visitors, with ECA Secretary John Brown here stopping the traffic for the 'VIPs'! 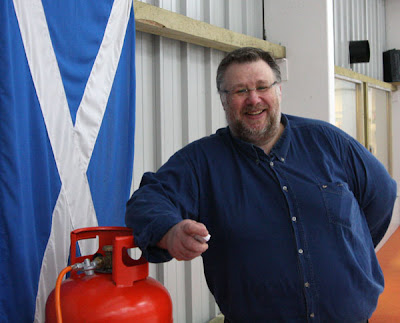 James Hustler, a gas cylinder, and the saltire. Pick the odd one out. 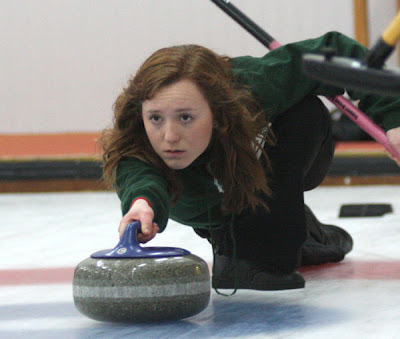 A successful rink can be judge by its young curlers. Fenton's Rink is used by lots of young people from local schools. Naomi Robinson (16) is one of a number of youngsters who have a big future ahead of them. And it was great to see them playing for England at the Four Nations 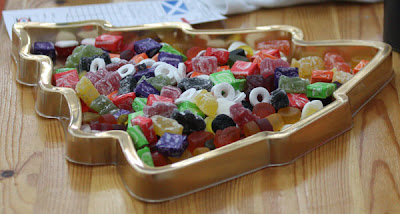 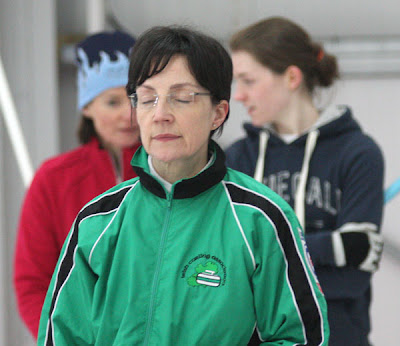 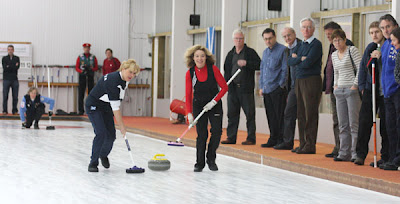 There was excitement. The last few stones in the second Scotland v England women's game, with the Connie Miller trophy on the line were really tense, and much appreciated by those who watched. 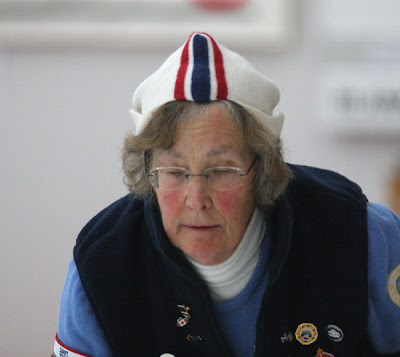 Hard going for Rosemary Biggart who had to play two lots of back-to-back games during the weekend. And had the disappointment of seeing the CM trophy just slip away. Special medal to Rosemary gets my vote. 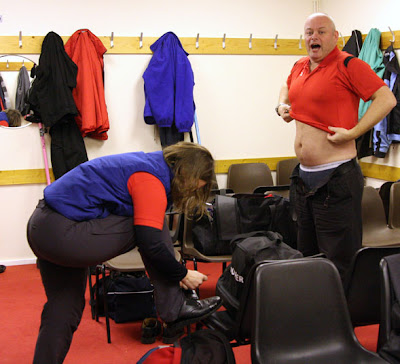 With the women's changing room out of commission, the unisex option certainly did not faze the competitors. Thanks Adrian, your fans will like this one! 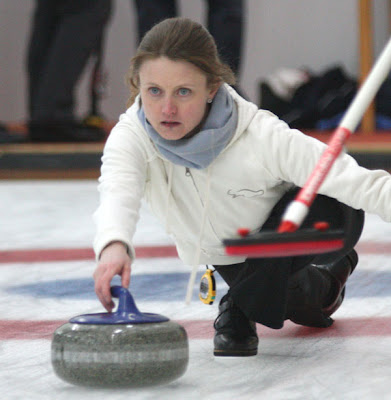 Lana Watson played the shot which saw the English team recapture the Connie Miller trophy. She also was the 'Eyes of the Day'. 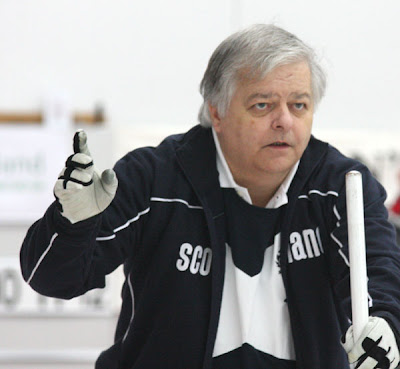 Mind you, this was a head to head competition against James Carswell! "Aye, aye!" (Other captions welcomed) 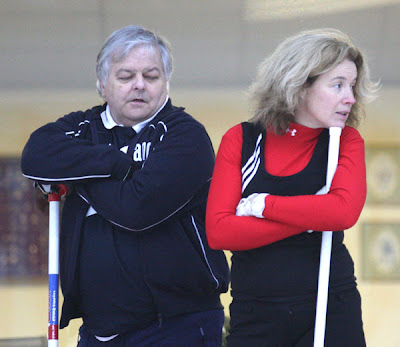 James was definitely my favourite photographic subject. "Let me just shut my eyes and I'll have a wee dream about Elspeth." 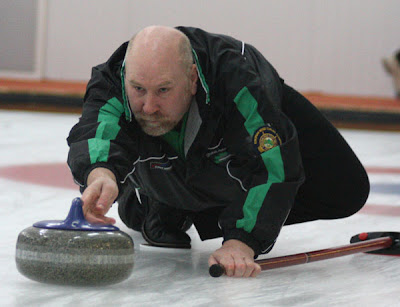 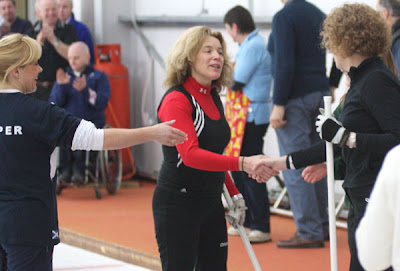 The handshake - long may games of curling begin and end this way.

So let's try make sense of all the results. And thanks to John Brown who is the keeper of all the records for the Four Nations. It is customary for representatives of the four national associations to present and receive the trophies. So here we go, in no special order. 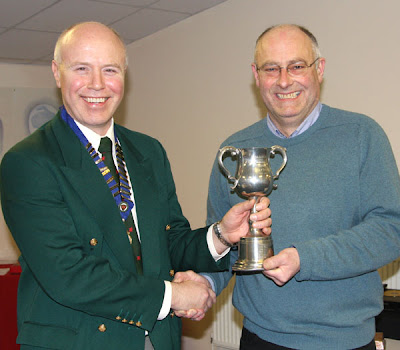 This is the Meikle Trophy, between Wales and Ireland, contested by one men's, one women's and two mixed teams. Ireland won this by a shot. Andrew Tanner and Bill Gray. 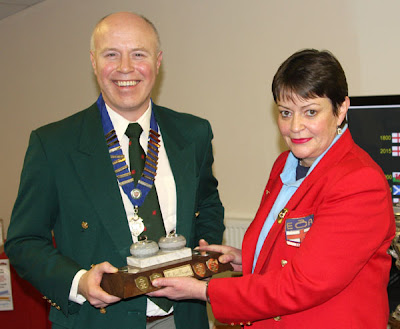 Andrew Tanner and Alison Arthur with the Kay Trophy for competition between Wales and England (one men's, one women's and two mixed teams), the former winning this contest 36-15. 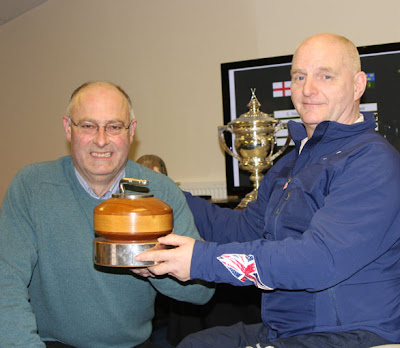 The Marshall Millenium trophy is for the Scotland v Ireland competition. Two mixed, one men's and one women's team. Ireland was the holders of this trophy, and won it again. Michael McCreadie for Scotland presents the trophy to Bill Gray. Alastair MacIntyre men's team beat John Jo Kenny 11-4, but Rosemary Biggart lost to Carolyn Hibberd 7-5 in the ladies match, James Carswell went down 2-12 to John Jo Kenny, and Stewart Sutherland 5-7 to Tony Tierney in the mixed games. 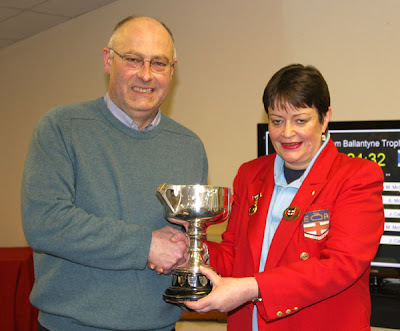 England v Ireland play for the Turnbull Trophy, two mixed, one men's, one ladies' match, won by Ireland by one shot. 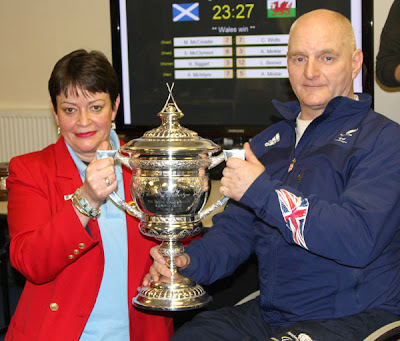 I've already mentioned the Tom Ballantyne trophy contested this weekend in five men's games between Scotland and England. This is the oldest of the trophies played for. Here Michael McCreadie accepts the trophy which was won by Scotland. 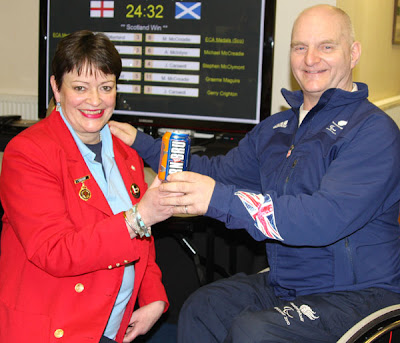 Michael presents a temporary replica of the Connie Miller trophy, played for between Scotland and England by two ladies teams. Rosemary Biggart beat Hetty Garnier 8-5, and lost to Lana Watson 8-4. Overall we went down by a shot 12-13. 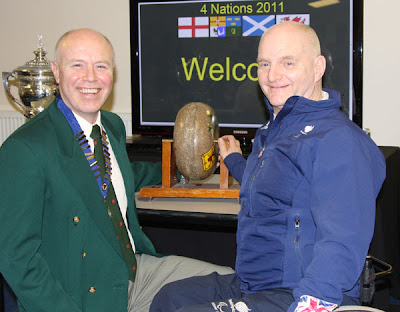 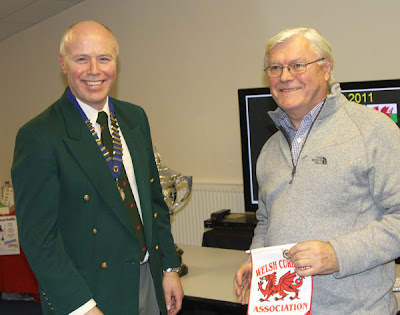 The Welsh Curling Association will host the Four Nations next year, on the same weekend in January, probably at the Greenacres rink in Renfrewshire. Plans are being developed to construct a dedicated curling facility in Wales, let's hope these will come to fruition. Here Andrew makes a presentation to Ernest Fenton.

So how will Scotland's teams be selected next year, and whose decision will it be? If you ask me, I would give the job to Graeme Maguire, who has been the 'secretary' this time, with a remit to invite curlers from all of Scotland's clubs who would like a chance to play, with first refusal going to those who answered the call this time. But shouldn't the job be given back to the Royal Club President and the Areas Standing Committee? Don't be daft! They embarrassed us all with their stupid decision that our teams at Fenton's should just play 'for fun'. These 'representatives' are supposed to do just that ie represent the wishes and aspirations of club curlers in Scotland. I think they failed in their duty to us members.

Let's hope for better in the future. 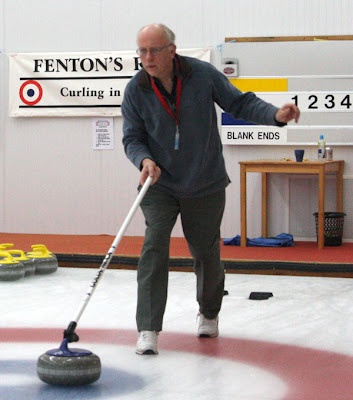 I couldn't resist throwing a few stones myself at England's only dedicated curling facility!