British Open at The Peak

When I started my curling way back when, there were few ice rinks, but each had their 'big competition', all with grand names. In Falkirk for example you could compete in the British Open. This competition, with its fabulous trophy, is still played today, and Ian McGregor, of the Stirling Curling Group, sends this report:

"The British Open 2011 was played over four days, culminating in the final last night (Thursday, February 10). This long standing event originated in the old Falkirk Ice Rink which closed in 1977 and transferred to the then new Williamfield Ice Rink in Stirling. The event is now run at The Peak Ice Rink in Stirling.

In its hay-day this event tended to draw competitors from all over Scotland who returned year after year. It had a reputation for being an inclusive tournament giving enjoyment to teams of all standards. While its present incarnation is somewhat smaller, the ethos remains the same. In this case we had Eve Muirhead and Kelly Wood mixing with Virtual Club entrants.

The ladies, with their 'token man' Lee McCleary, certainly came out tops in this competition.

Planning for next year’s competition will be starting soon and as it is the British Open, what about entries from other parts of the British Isles next year?" 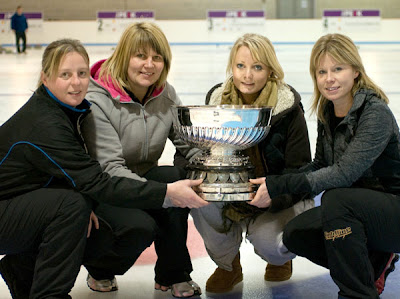