David Horne, ACDO at Braehead, sends this report on the 'Glynhill Volunteers Bonspiel'.

"Bruce Harley, curling manager at Braehead, was so delighted with the organisation and running of the Glynhill International, that he invited all the volunteers and sponsors, plus his own staff members, to come along to the rink for a fun bonpsiel.

Volunteers were put into the following teams:

The Canadians - all members of the Canadian CC
The Driving Force: minibus Drivers.
The Money Men: the sponsors.
The Umpires: the Umpires for the event.
Calendar Girls: a team of ladies who had looked after the coffees, home baking and selling of 'dodgy calendars'.
The Cool Dudes: the Braehead ice technicians.

The format was two fun ends of curling against three different teams, but several teams took it very seriously. Chris Noble, senior ice technician, was seen on the ice 30 minutes beforehand to give two of his team, who had never played before, a quick lesson on how to deliver a stone and how to sweep. Well, to everyone’s surprise (except Chris), they won five ends out of six and won the competition by 10 shots to 1. Interviewed after the game he was still bemused how they lost a shot in the last end!" 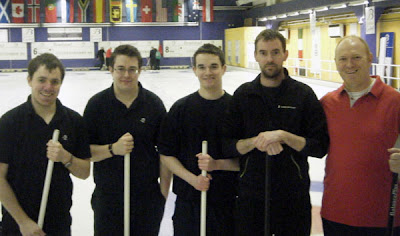 Winners on the ice with Bruce. The Cool Dudes: David, Heggie, Calum and Chris.