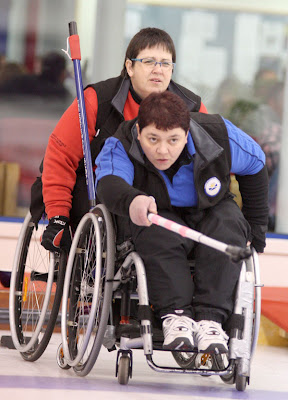 That's Mo Simpson above, braced by Mary Bell, competing in the Scottish Wheelchair Curling Championship. I spent today at Curl Aberdeen where the event is ongoing. I had a great time. I saw some top class curling, I caught up with old friends, met a number of people for the first time, had more than my usual fun trying to capture with photographs what wheelchair curling is about, got dressed up, was asked to name a family friend (!), and was given a big surprise. So read on. 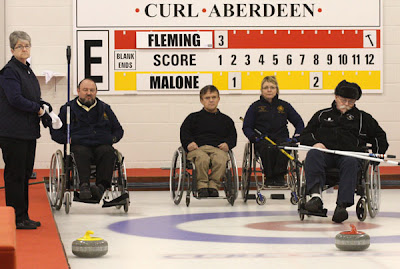 In fact, the only thing about wheelchair curling that disappoints me a little is that sometimes it seems there is more colour in a coal scuttle! But everyone has heard me say that (too) often. Wheelchair curlers are colourful in other ways. The intensity of play leads to some really good expressions. For example... 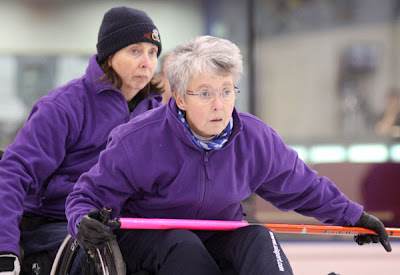 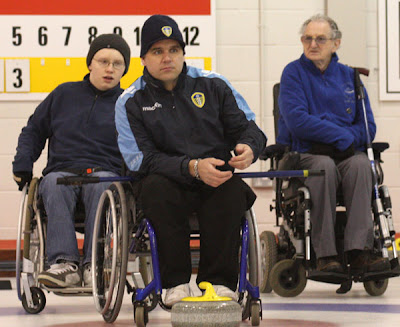 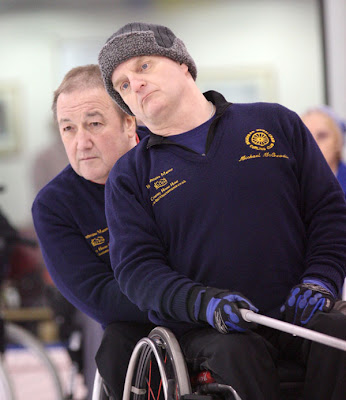 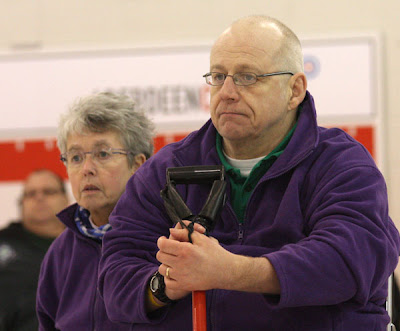 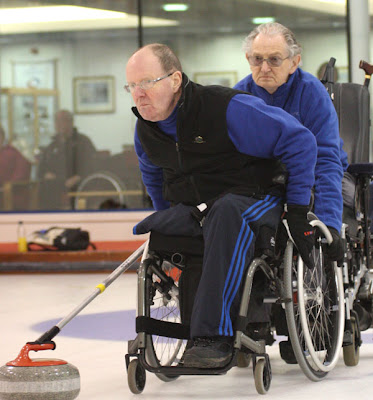 Great to see Ken Dickson, one of the first wheelchair curlers I ever met, still competing. 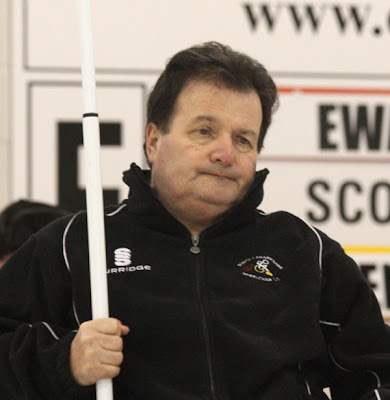 I can guess what Eddie Fleming is thinking! 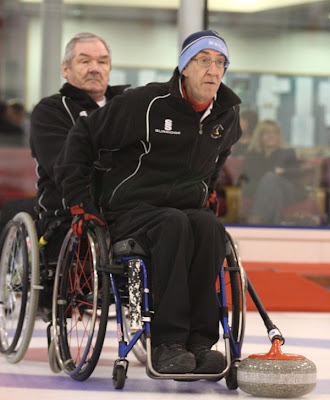 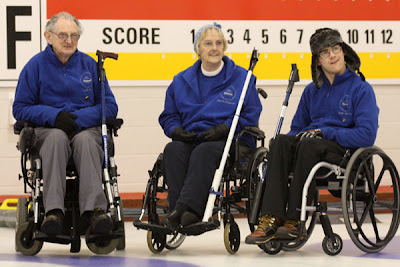 Leslie Barr, Maria Duncan and Ross Hatten seem to be enjoying their game. Ken Dickson was their skip. 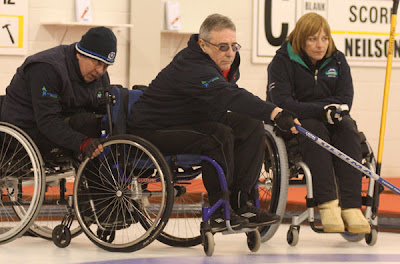 Here's three more who seemed to be enjoying their curling too, and taking it seriously as well. That's Jim Gault delivering, Mike McKenzie bracing and Jackie Cayton watching. 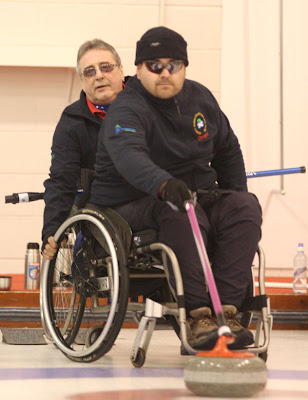 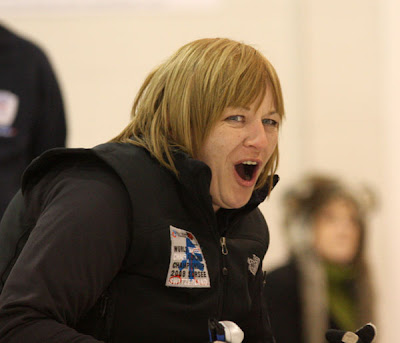 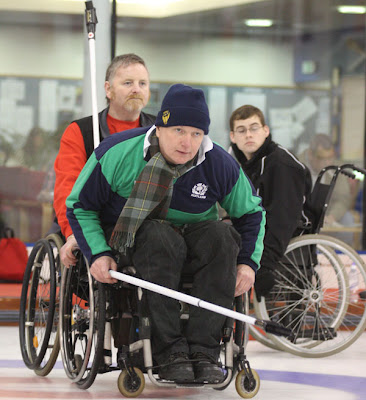 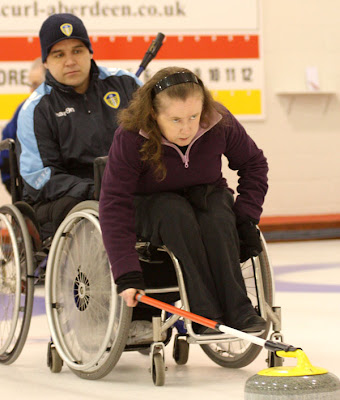 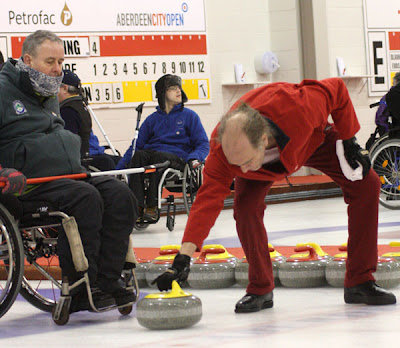 A wee toast to the 'helpers', on whom wheelchair curling depends for its smooth running. Here a blogally of distinction (and an old friend) David Kelly, sets up a stone for David Telfer. 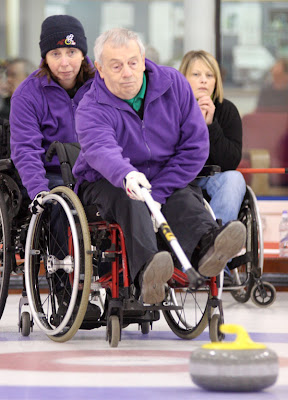 What was that I said about expressions? Bill Masterton. 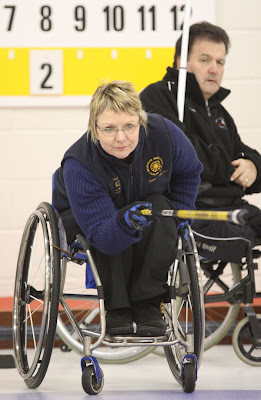 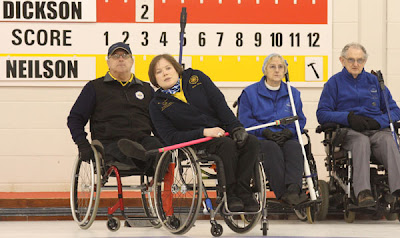 Here's another world silver medallist, Aileen Neilson, who is playing with Ian Donaldson (behind her) and Tom Killin and Michael McCreadie. 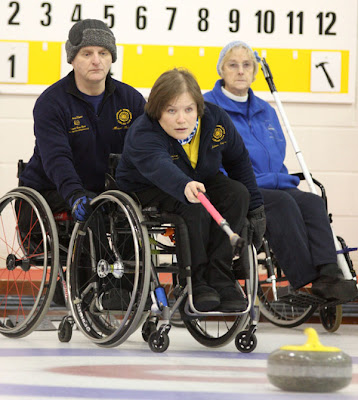 Here's another of Aileen, braced by Michael McCreadie, as Maria Duncan watches the action. 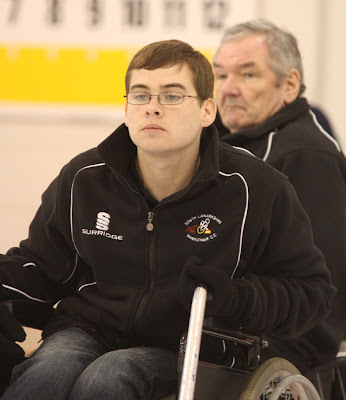 Perhaps this is a star of the future, and as my namesake he's off to a good start. Well, perhaps not! Let me introduce Daniel Cowan to you. He curls out of Lockerbie, and is one of, as yet few, younger wheelchair curlers who have taken to the game. (Craig Carter, pictured above, is another) 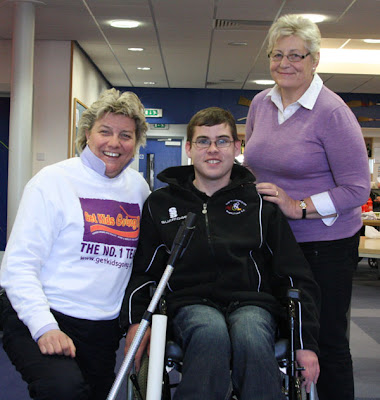 It's young people like Daniel that these women want to encourage. On the left is Jane Emmerson, the Chief Executive of the charity Get Kids Going!, and on the right is Joyce McIntosh, a Trustee of the charity. I knew nothing about Get Kids Going! until today. It exists to give disabled children and young people - up to the age of 26 years - the opportunity of participating in sport. Practical help - in the form of specially built sports' wheelchairs - can be provided so the young people can participate in a variety of sports. Get Kids Going! inspires British disabled youngsters to compete in sporting events, right up to Paralympic level, by giving them 'sports grants' to help with training, physiotherapy, travel, competition fees, and design and development of sports' wheelchairs. Check out their website here. And read about their involvement in wheelchair curling here. 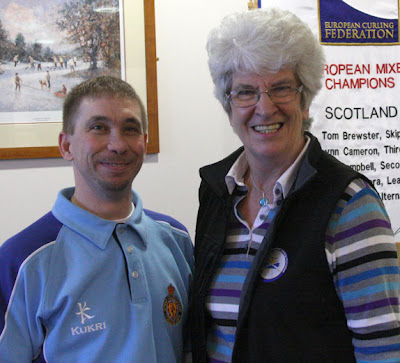 Now here's another person I was pleased to meet today. This is Tony Zummack from Saskatchewan who is the Head Curling Coach designate with the Scottish Institute of Sport and will be working with top wheelchair curling athletes in the run up to the Paralympics in Sochi.

Tony is just here on an informal visit, prior to moving to Scotland as soon as all the paperwork is complete - he hopes in May - to take up his post. So he's been here this month, scouting for accommodation, and of course meeting his future colleagues and the athletes with whom he will be working. It was great talking to him today, and I wish him every success. I am sure you know that the other person in the photo is Judy Mackenzie, the Scottish Wheelchair Curling Association President. 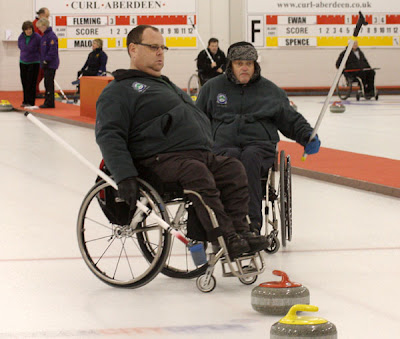 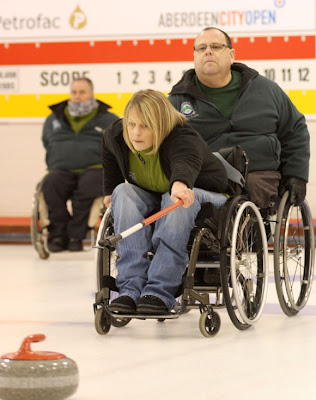 And here's another old friend who I was pleased to see on the ice again today, Louise Dodds 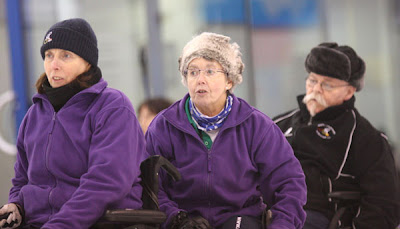 "If you want to get ahead in wheelchair curling, then you have to get a hat!" That's Angela Higson, Rosemary Lenton and Brian Douglas in this pic. 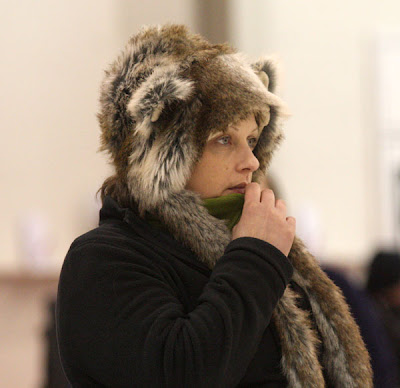 Louise must have been reminded of this at lunchtime, for she came out for the afternoon game wearing a hat of real distinction! In fact - as I'm sure you will agree - it is something very special. Not so much a hat, more of a family friend! 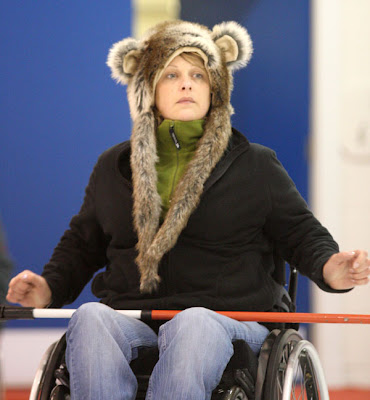 Apart from keeping her ears warm, does it help her curling? It must do - keeping your head cosy helps you to think clearly, and keeping warm, in general, is a problem area for all wheelchair curlers with no sweeping to get the body temperature rising.

I was introduced to 'the hat' after the games. Tactile, soft - it's the dangly bits that do it for me - and it soon found its way to my head. (Hopefully that photo will never appear!)

I asked Louise what its name was. It didn't have one. She challenged me to find a name. I said I'd think about it. It came to me driving back to Forfar. It has to be 'Precious'. So Louise, your hat is called 'Precious!'

Fans of Tolkien will know why. Something that has a magnetic fascination that you covet, and want to touch, something you must have. "We wants it, we needs it ...... My Precious," see here. 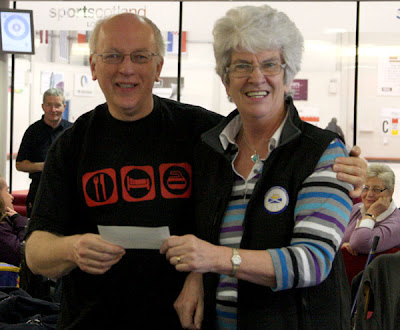 And talking of Gollum, aka Black Bob, that's me on the left, wearing an 'Eat, Sleep, Curling' teeshirt (that's all I seem to be doing at this stage in the season). Judy is presenting me with a cheque from monies raised from a raffle during the championship (the big prize from Loch Leven's Larder) to help keep Skip Cottage Curling on the road into next season. As many will know it has been a difficult time at Skip Cottage since that cold spell at the beginning of December last, and this came today as such a wonderful boost to morale. I thank all at Aberdeen who contributed. I am most grateful, and humbled.

And if you too would like an 'Eat, Sleep, Curling' teeshirt, Mary Bell is selling them to raise funds for Lockerbie's Wheelchair Curling Club.

If you want to follow tomorrow's (Sunday's) semifinals from Aberdeen, the results will be here.