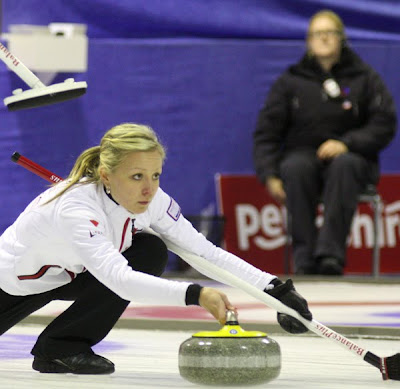 Two semis were on the ice this evening, to find the second teams for tomorrow's finals of the World Jurnior Curling Championships at the Dewar's Centre in Perth.

With Scotland already through to the women's final, Russia had a chance for a rematch if Anna Sidorova's team could beat Trish Paulsen's Canadians who had come through a tiebreaker and then the Page 3-4.

The Canadian skip (above) had the advantage over Anna tonight, three times scoring three-enders. Each time though the Russians fought back. They went down the last two behind but lay the two stones needed to force the extra. But the Canadians were not to be denied and Trish made no mistake with her last hit.

Russia will now play Sweden in a bronze medal game. 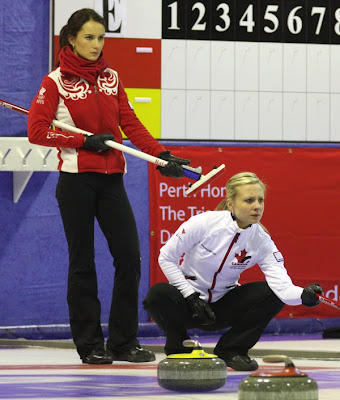 Here are the two skips. Trish Paulsen in front, Anna Sidorova behind. 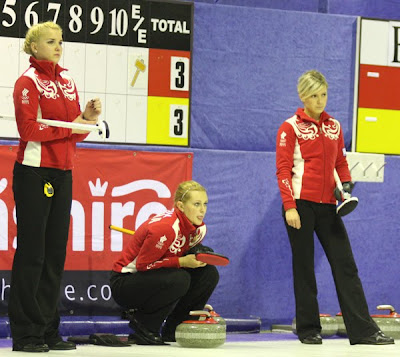 That's Viktoria Moiseeva in the hack, flanked by Ekaterina Antonova and Galina Arsenkina. 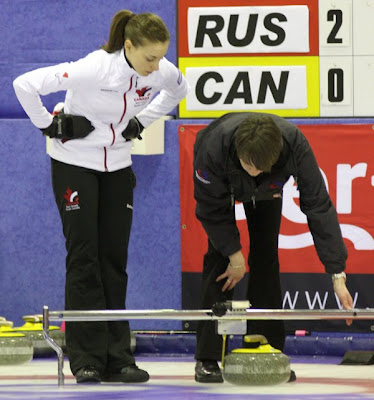 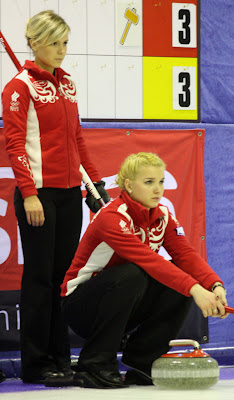 Galina Arsenkina behind, Ekaterina Antonova sitting on the hack. 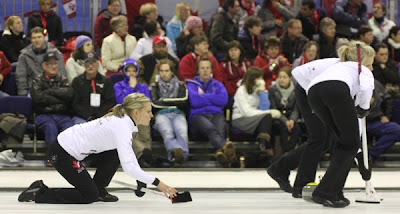 The stand was packed to watch the semis. 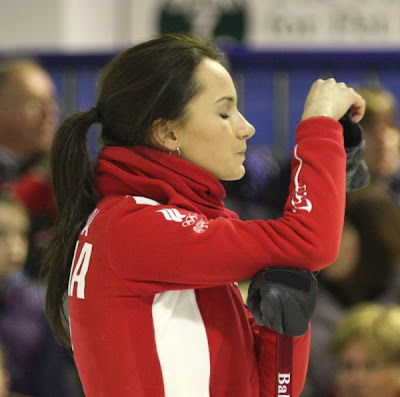 Anna's body language shows she knew the game was slipping away when she lost the second three. 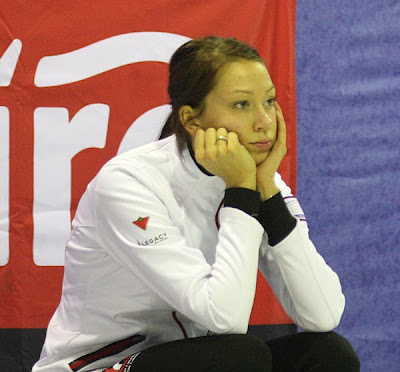 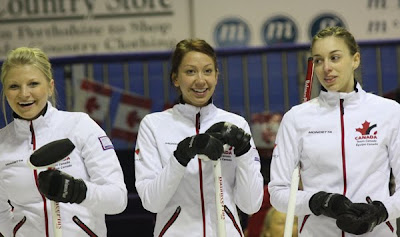 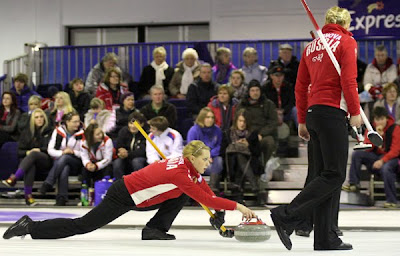 Viktoria Moiseeva in action. (This by special request for a blogally who writes, "More pics of Viktoria, please.")

Sweden is in the men's final, and their opposition tomorrow morning would come from the Canada- Switzerland semi this evening. Braeden Moskowy's Canadian team had started the event slowly, but going into this game they had won seven in a row.

The semifinal was a great game. Let's just say that the teams came down the last end tied. It was a busy head in the last end, the Swiss unable to keep things clear, both teams trying for the one foot. The Canadians thought they had it won.

Benoit Schwarz, with barely a minute on the clock, coolly threw his last stone - expertly looked after by the front end of Valentin Tanner and Roger Gulka - onto the button for a Swiss win! Exciting to watch.

The Swiss will now play Sweden tomorrow. The Canadians will contest the bronze medals with Norway. 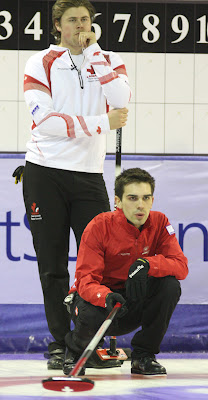 That's Braeden behind, with Peter de Cruz, the Swiss skip who plays third stones for his team, in front. 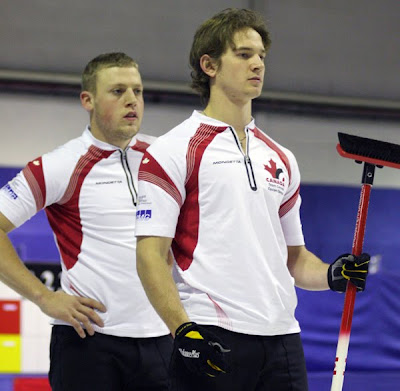 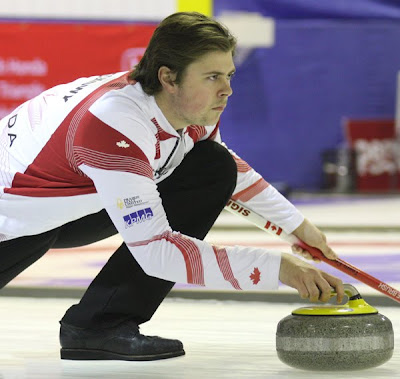 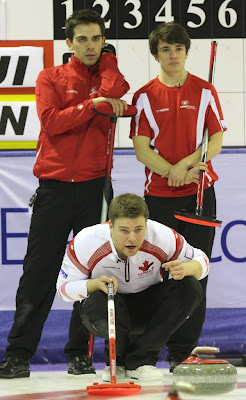 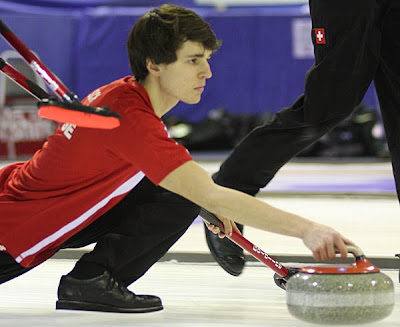 Benoit Schwarz. What a cool customer he is, playing the last stones for the Swiss side. 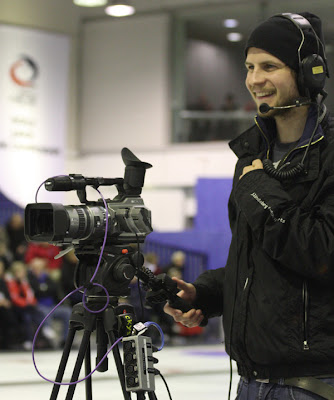 The LiveChannel team have done a great job webcasting from the event. That's Marcus Bohman behind the camera. You can watch tomorrow's finals here. I like too that you can log in to the Facebook page here when you are watching the webcast, and comment or ask questions. 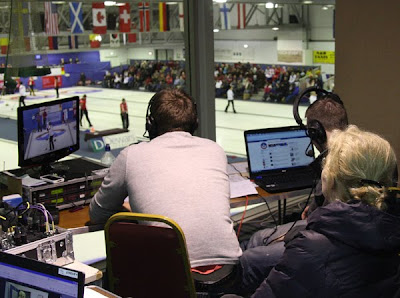 Logan Gray and Kenny Edwards have been the commentators for most of the games, and will have answers to your questions! 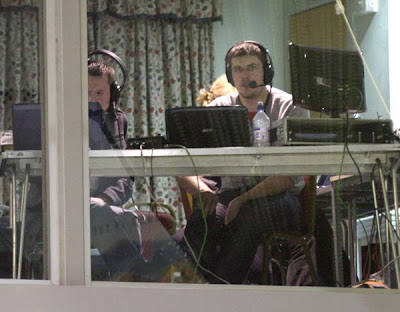 Looking up from the ice to the commentary position.