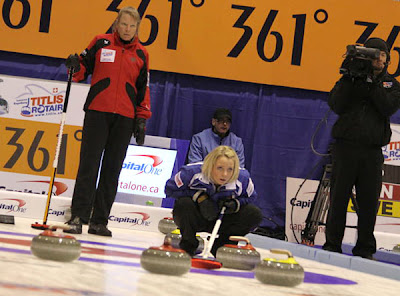 Anna took her single with the hammer in the first end, and in the second, with Germany looking at a huge end, skip Schoepp wrecked on a guard and our women had stolen a shot. This was certainly an influencing point in the game.

Third and fourth ends the teams exchanged pairs with Germany blanking the fifth end with the Scots 4-2 ahead. Sixth and seventh ends single shots were exchanged before Anna played an outrageous long raise for her two in the eighth to lead 7-3.

Then in the ninth against a further two shots Schoepp dragged up short on her draw and at 3-9 Germany had had enough.

In the post match interview Anna was asked if it was a fun game to play. "I am enjoying it out there," she said. With Canada, accepted as the strongest of the curling nations, and the current world champions Germany defeated in the one day, who would not enjoy the experience! It really was a good day at the office for our Scottish champions!

Next up is China to-morrow morning followed by Russia in the evening. Let's hope it is just as good as to-day."