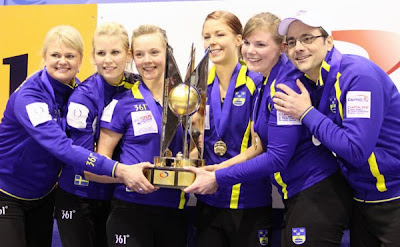 Could Anette Norberg make it three World Women's titles for herself and a first for Cecilia Ostlund, Sara Carlsson and Lotta Lennartsson or would Amber Holland take the title back to Canada for the first time in three years?

The game opened with Sweden with the hammer and Anette Norberg, going for a blank end, hit and stayed in the house. Canada blanked the second and then gave up a steal of one to Sweden when, facing three, Amber Holland's draw was just not good enough.

In the fourth end with her first stone Holland split to lie two. Norberg opted for an attempted raise take-out when there was a possible draw round the guards to the four foot. Her shot failed and Canada's Holland drew for three and Canada were in a one shot lead.

Sweden looked for a pair in the fifth but had to settle for a single to tie the game 3-3 at the break.

In the sixth, Holland should have had a pair but she hit and rolled out. In the seventh Norberg, with only one Canadian stone facing her, hit and stayed in the house and, as in the opening end, failed to make the blank.

Eighth and Sweden lay one but, with no way in to the shot, Holland tried a double raise on her own stones which just failed. It was 5-4 to Canada.

Sweden ties the game up in the ninth when Anette makes a last stone draw under pressure.

The Swedish team hold their nerves. Misses by Canada's Schneider sisters and the Swedes were lying well as Canada failed to clear the guards. Holland faced three shots as she went to deliver Canada's last stone of the final, a draw fully into the four foot. She came up short and it is Anette Norberg's Swedish team which is the Capital One World Women's Champions.

Earlier China had beaten Denmark, after an extra end, for the bronze medals.

The event website, for all the linescores and galleries of action photographs, is here. 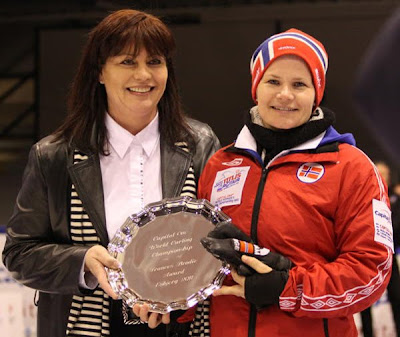 Photos courtesy of Leslie Ingram-Brown
Posted by Bob Cowan at 18:21