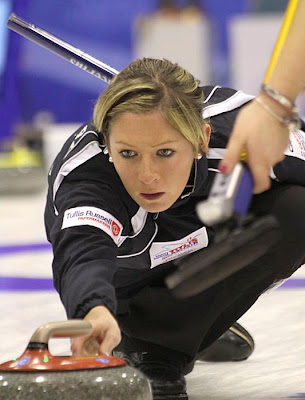 For this morning's game against China Anna's team had a line-up change with Eve Muirhead (above) coming in at third, Claire Hamilton moving to lead and Rhiann Macleod taking on alternate duties. This was a team decision backed by the coaching staff as Rhiann has been struggling from a cold.

Bingyu Wang (better known as Betty) is a veteran campaigner at this level and has a very experienced team playing under her guidance. This was always going to be a tough game for Anna, Eve, Vicki and Claire.

In a cat-and-mouse opening few ends singles were exchanged in ends one and two and China then blanked the third before being forced to take a single in the fourth. Anna was in severe trouble in the fifth, facing five China stones in the house, but she coolly drew for shot with her first. Betty then drew on top of the Scottish stone. Anna had no shot to play and rather than risk the loss of a big end opted to 'throw away' her final stone giving up a single against the head. So it was 3-1 China at the break.

China started to apply the pressure and Anna hit and stuck for her single in the sixth but China came back to take a two in the seventh with a neat tap back by Wang.

The game was slipping away from Anna's team and China stole singles in the eighth and ninth ends to get the concession.

After the game Anna said, "We struggled with the ice a little bit more as it was not curling as much as it was and the swing was different on each side which caught us out. We probably could have given them a better game. We just have to bin that one and move on to tonight."

Team Russia, skipped by Liudmila Privivkova who throws third stones with Anna Sidorova throwing fourth, will be the next test for Team Scotland."