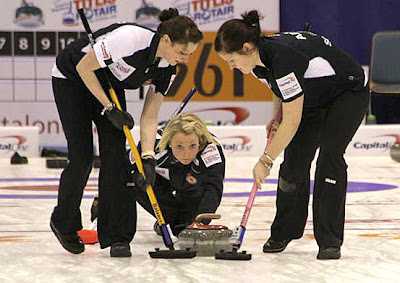 "Scotland returned to the ice this evening playing the original team with Rhiann Macleod back as lead and Claire Hamilton back at third. Vicki Adams was at second as usual.

The game opened with Anna hitting for a deuce in the first end and then the two teams exchanged single shots through two, three and four. End five and a mistake by Russian skip Sidorova gives Anna the chance for a draw for two and a lead at the break 5-2.

Sidorova faced two Scottish stones in the sixth with her last stone of the end and played the perfect double to bring the Russian team back into the game only one shot back at 5-4. The seventh end saw Anna draw for a single and in the eighth Sidorova hit for two to tie the game 6-6. Scotland then blanked the ninth to hold the last stone in the closing end.

Russia placed a stone on top of the one foot guarded which the Scots cleared but Russia just kept replacing the guard. With her first stone Sidorova drew to the front four and Anna tried the raise double. She got one, rolled out, but the first Russian stone was moved further from the tee. Sidorova drew her second stone perfectly to a position that no double take-out was possible.

It all came down to a last stone draw for Anna for a win against Russia but the stone was lacking in weight and drew up several feet short of the house leaving Russia lying two shots for an 8-6 victory.

After the game Anna said, "I was confident of my draw weight and that was fine but I just didn't have the weight (talking of the last stone). We just have to bin today and keep looking forward and see how it goes from there."

In the other games there was success for the previously winless Korean team who defeated the Czech Republic in eight ends. Switzerland meanwhile went to an extra end before winning against China, and Canada had a last stone win over the USA.

The Scots get a rest tomorrow morning before tackling Korea and Denmark. Nothing short of two wins will do if Anna and her team are to have any chance of reaching the second stage play-offs."