I wrote about the Scottish Wheelchair Curling Association's Shot Maker competition back in October, see here. It was played out over the season and Judy's Jug was duly awarded earlier this month.

"The top twelve final scorers in the new SWCA Shot Maker competition for Judy’s Jug were invited to the final at Kinross Ice Rink on Saturday, March 12. A fascinating series of tests involving six disciplines had brought twelve players covering six ice rinks to the final.

Mike McCreadie was the top scorer in the league with 34 points but he still had to take his chances at the grand final. The Shot Maker 2011 finalists’ scores ranged from 18 to 34.

Again inclement weather prevailed and there were three call offs on the day. The final was a very closely fought contest with two players tying and the tiebreaker rules had to be invoked. The overall winner of the Shot Maker was Aileen Neilson with Mike McCreadie runner up.

A good number of curlers took part in this, the first year of the event, and SWCA is certain the number of entries will increase next year." 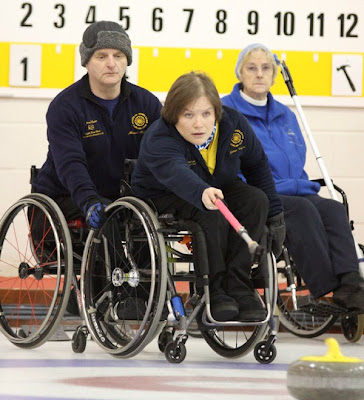 In the absence of a photo of Aileen with the trophy, here is a pic of her delivering at the Scottish Wheelchair Curling Championship at Curl Aberdeen recently.